A Regency Christmas by Jane Dunn

The Georgians made a big deal over Christmas. Celebrations lasted for a month from the Feast of St Nicholas, 6th December, until St Stephen’s Day, Twelfth Night. Decorating the house, eating and drinking, singing carols, exchanging presents, going to parties and charitable giving were all part of the festive season.

Evergreen branches and ivy brought in from gardens and hedgerows decorated every house from the modest to the country mansion. Although Queen Charlotte introduced the German tradition of a Christmas tree to the Court in the early 1800s, the idea did not catch the public imagination until forty years later when engravings appeared showing Queen Victoria and her family sitting around a magnificent illuminated tree.

At the heart of the festivities, however, was food and drink. It was an even more alcoholic time of the year than usual, and Georgians were known for their drinking and general licentiousness. The Christmas day feast featured every kind of fowl and game.  If you were rich with a deer park there would be a haunch of venison along with the goose, turkey and boiled ham. Those who were poorer killed one of their laying hens, and the country poor would have rabbit or jugged hare poached from the local landowner’s estates.

The meal ended with the ubiquitous plum pudding, which a French traveller explained to his fellow countrymen: Plum-pudding is a mass of paste, formed of equal quantities of crums of bread or of flour, of firm fat from the kidneys of beef, of dried raisins, and of  ‘corinths’ [dried plums?]. Eggs and a small quantity of milk are also added; and to improve the whole, a little citron, spices, and brandy.’

Parties and balls were also a feature of a Regency Christmas. When not eating, dancing, making music or playing cards, revellers enjoyed parlour games: Charades, Musical Chairs, Hunt the Slipper and more or less restrained versions of Blind Man’s Bluff and Truth or Dare, with snatched kisses under the mistletoe. At Christmas, young people were ingenious in finding ways to be more flirtatious and intimate, with behaviour which would have been considered scandalous at any other time.

The day after Christmas was for charity when households delivered ‘Christmas Boxes’ to servants and the local poor (giving rise to the term ‘Boxing Day’). And, as is the tradition today, every decoration had to be dismantled by Twelfth Night to ward off bad luck in the coming year.

After a month’s such revelry perhaps another month was needed to recover. 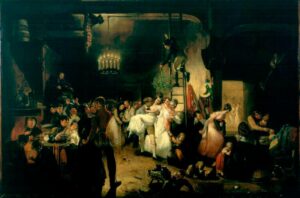