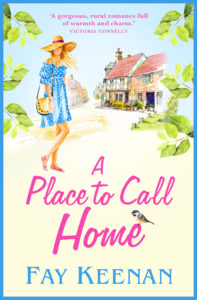 Read on for an exclusive extract from ‘A Place to Call Home’ by Fay Keenen.

A Place to Call Home

‘White sage is all very well,’ Holly Renton reflected, ‘but the ashes are a bugger to get out of the carpet.’ Earlier that morning, before the shop had opened, Holly had carried out a ritual called smudging, which was meant to purify the energy in a building, promote positivity and remove negative energies. Picking up the dustpan and brush, she emptied the pungent remains of the dried herb bundle she’d ignited and then wafted around the windows and doors of the shop into the bin.

‘I know you recommend this all the time for other people’s houses, but why are you so bloody obsessed with doing it in the shop?’ Rachel, Holly’s sister, glanced down at where Holly was still brushing the rug under the mullioned front window of ComIncense, the shop specialising in herbal remedies and well-being aids that Holly ran in the sleepy but nonetheless New Age small town of Willowbury and smiled. Just beyond the shop’s counter, the door that led to Holly’s small back yard was open and Harry, Rachel’s three-year-old son and Holly’s nephew, was playing happily with a set of wooden animal-shaped blocks in their own lorry, which had come from a box of assorted toys that Holly kept specifically for the younger customers. Holly didn’t believe, unlike some of her business-owning neighbours, that children should be banned from places like hers, and since the early-spring weather was warm and pleasant, Harry had trundled out into the sunlight to play.

‘You’ve got to refresh places from time to time,’ Holly replied. ‘Especially when there’s been a lot of negative energy about, and since all of the scandal with Hugo Fitzgerald, I really felt like this place needed a spiritual cleanse!’

‘You can say that again,’ Rachel reached under the wooden apothecary’s dresser that displayed countless jars and pots of dried herbs and flowers, all purporting to be of some spiritual or physical benefit, to retrieve one of the toy llamas that Harry had thrown under it. ‘What a way to go…’

‘Oh, I don’t know,’ Holly replied, still sweeping. ‘At least, having had a massive coronary, he wouldn’t have known much about it.’

‘But what a waste of a good plate of scones and jam!’ Rachel grinned. ‘Mum told me that his constituency agent found him face down in them at his desk.’

‘I wouldn’t have fancied digging him out of them,’ Holly said. ‘But from the size of him, the heart attack was an accident waiting to happen. And gossip has it, he had his finger in a lot of pies, not just the odd plate of scones.’

‘Oh, you know how the rumour mill goes into overdrive when something like this happens.’ Rachel, who had more of a tendency to see the good in people than her sister did, dismissed Holly’s comments with a wave of her hand. ‘I mean, I’m not saying he wasn’t a prat, but nothing was ever proven about his financial misdemeanours. Although, I have to admit, since he couldn’t have given a stuff about Harry’s condition, and getting access to these new drugs, I’m hoping the new guy will be more receptive to the cause.’

‘It’s still bloody unfair that he gets to swan in here and take the seat after only the quietest by-election,’ Holly grumbled as she replaced the dustpan and brush on the shelf behind the counter. ‘I mean, the guy’s only a year older than me and he’s been parachuted into one of the safest seats in the country. Even if we have a change of government, he’s unlikely ever to lose his seat. What if he’s just as crap as Fitzgerald and couldn’t care less about us here in his constituency? We’re stuck with him until he chooses to retire.’

‘Give him a chance,’ Rachel said reasonably. ‘He might be good for this place.’

‘Have you made an appointment to see him yet?’ Holly asked, glancing down to where Harry was now building a tower of exotic wooden animals that was getting more and more precarious the higher it got.

From the outside, Harry looked like any other energetic three-year-old, but on the inside, it was a different story. Weeks after he’d been born, Rachel had been launched into a perpetually revolving carousel of physiotherapy, medications and experimental trials in an attempt to alleviate the chronic condition, cystic fibrosis, that would, in all likelihood, limit Harry’s life. The latest medication, which might make a huge difference to Harry’s life expectancy, was currently being held up because the government was still negotiating with the pharmaceutical company involved over a reasonable price to supply it to the National Health Service. How it was possible to put a cost on a life such as Harry’s was a source of increasing frustration and heartbreak for Rachel and the family.

‘Not yet,’ Rachel sighed. ‘If Hugo Fitzgerald couldn’t be arsed to do anything other than toe the party line, then why should this new guy be any better? Especially if he is a total rookie. I doubt he’ll stick his neck out for Harry.’

Noticing Rachel was, unusually for her, close to tears, Holly hurried around from behind the counter and gave her sister a hug. ‘Don’t let it get you down,’ she murmured. ‘I’ll always be right there with you, campaigning to get this little munchkin the treatment he deserves.’

‘I know,’ Rachel replied, giving Holly a shaky smile. ‘I’m fine, really. It’s just when he has a bad day, it reminds me of the challenges he’s facing, which will only get worse as he gets older. And knowing that the new medications could potentially make those challenges so much easier to face…’

‘We’ll get there,’ Holly said. ‘I’ll be with you every step of the way, like I always have been. And I still think it’s worth a punt with this new guy, you never know.’

‘I’ll try and get in to see him over the summer,’ Rachel replied, breaking the embrace from her sister and grabbing the last of the wooden animals to add to Harry’s tower of jungle wildlife. ‘Can I make a drink?’

‘Of course,’ Holly said. ‘I’ve got some organic fair-trade matcha tea in the kitchen.’

‘Is that the super-energising stuff?’ Rachel asked. ‘After being up with Harry last night, I could certainly do with a lift.’

‘Honestly, it’ll keep you going until midnight!’ Holly said. ‘Go on… you know you want to.’

‘All right,’ Rachel replied. ‘But if I end up buzzing around Willowbury like a wasp for the rest of the day, I’m blaming you.’

‘Fair enough. And make me a cup, too,’ Holly called as Rachel disappeared up the stairs to Holly’s flat above the shop. Popping the dustpan and brush behind the counter again, she continued the conversation, since Rachel had left the door to the flat open. ‘Perhaps I should give this new guy the benefit of the doubt,’ she said, adjusting the labels on the jars of dried herbs and plants on the dresser so they all pointed uniformly outwards. ‘After all, new blood could be a good thing.’

‘Perhaps we should be fair and reserve judgement until he’s been in the job a few months,’ Rachel said over the bubble of the kettle. ‘You never know, he could be just the tonic this place needs, politically.’

‘You always try to look on the bright side, don’t you?’

Holly was preoccupied for a moment with the Bluetooth speaker that usually piped relaxing, locally composed and produced music through the shop during business hours. The thing was a touch temperamental, but she’d just managed to reconnect it to her phone. Scrolling through her Spotify playlists, she thought she’d better try it out with something a little more lively, so she selected one of her current favourite film soundtracks, an all-singing, all-dancing number that was sure to blast out any gremlins from the Bluetooth connection. As the singer’s voice boomed through the shop, Rachel’s response to her somewhat rhetorical question was lost in the pleasant din of the soundtrack.

Determined to stop talking about a subject that was clearly getting more under her skin than she’d anticipated, Holly raised her voice above the music, calling up the stairs to her sister, and, unable to help herself, lifting her arms to sway to the beat of the song. ‘Well, he’ll have to do a whole lot more for this constituency than Fingers-in-the-till Fitzgerald did to get my vote. And, to be honest, I don’t really hold out much hope for some career politician who’s just been parachuted in, do you?’

Holly, caught in the rhythm of the song, completely failed to notice the appearance of a figure at her open shop door, who paused, motionless, unsure now of what his approach should be. To be fair, though, even if she had been aware, she probably wouldn’t have been too concerned; Holly wasn’t one to worry too much about what people thought. Having lived the life she had, and owning the business that she did, public opinion was the least of her worries. What she didn’t realise, though, was that the encounter with this particular customer would change her life forever.

We hope you enjoyed this extract. To read more, purchase the novel here: https://amzn.to/2NpI9Ur