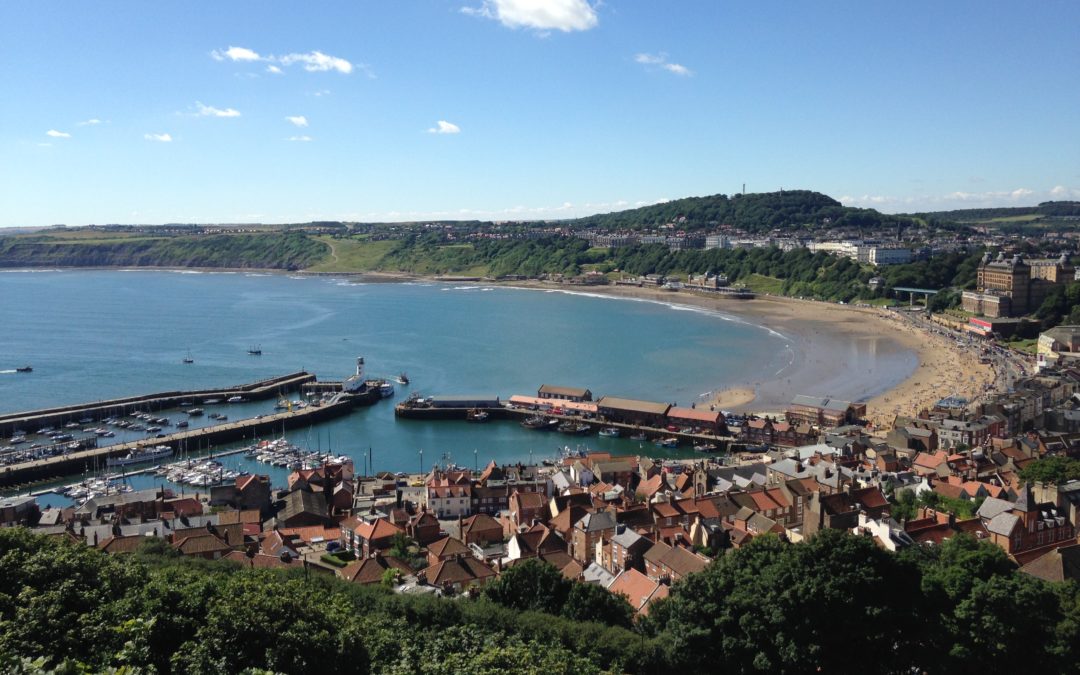 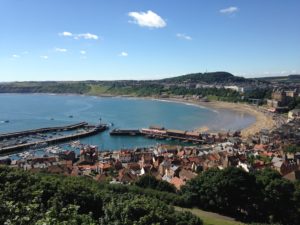 View of South Bay and Old Town from Scarborough Castle

Whenever I read reviews for my books, a recurring comment is about the setting. Readers seem to love the fictional North Yorkshire seaside town of Whitsborough Bay. Those who are familiar with the Yorkshire Coast feel like they’re back in their favourite places, and those who haven’t visited the area talk about how they’d love to sniff the sea air, wander round the Old Town and shop on Castle Street. Readers who’ve read several books talk about the excitement of being back in the warm and familiar setting. Whitsborough Bay is what my books are all about.

Yet, when I started writing, Whitsborough Bay didn’t exist. I didn’t actually have a setting at all. I had a vague notion that I would probably set my books in ‘the north’. Somewhere. No idea where.

So for someone with no setting at all, how did Whitsborough Bay so synonymous with my writing?

It started when I met my husband, about nine months after I’d had the idea for my debut novel. I was running a specialist teddy bear shop at the time in Richmond, North Yorkshire, and tentatively trying to write a few chapters between customers although, if I’m honest, I was floundering. I had a great idea and some solid characters but I had no idea how to turn that into an engaging novel. And a massive problem was that the vague ‘northern’ setting wasn’t working for me. There was no sense of the sights, smells, sounds or the community. 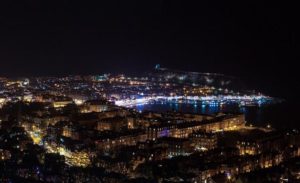 View of Scarborough at night from Oliver’s Mount

Mark lived in Scarborough and, after visiting him a couple of times, I realised I’d found my perfect setting. Or rather the inspiration for my perfect setting because I decided quite early on that I didn’t want to use a real place. Using a real place can work very effectively in fiction but I decided that, for me, it would bring limitations because I couldn’t just make up a building or road to suit my needs; I’d have to use what existed. I was also worried about someone knowing Scarborough and pulling me up on inaccuracies. So I created the fictional town of Whitsborough Bay – a blend of Scarborough, Whitby and Robin Hood’s Bay in both look, feel, and name. 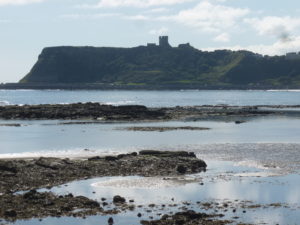 Scarborough has two bays – North Bay and South Bay – which are separated by a castle on the cliff top. Both bays boast popular beaches but have a very different feel. South Bay is more commercial with arcades, chippies and typical seaside gift shops whereas North Bay has a calmer vibe with the colourful beach huts, the Sealife Centre, Open Air Theatre and Peasholm Park. 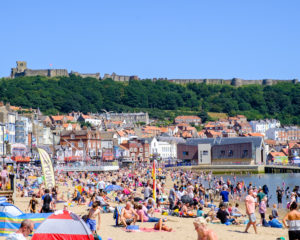 Scarborough’s South Bay in the summer 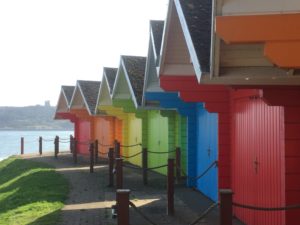 The basic geography of Whitsborough Bay is a match for Scarborough. All the businesses and attractions have different names in Whitsborough Bay such as the Sealife Centre being the Sea Rescue Sanctuary and Peasholm Park becoming Hearnshaw Park, but anyone familiar with Scarborough will recognise these places in Whitsborough Bay. They can also make a good guess which café or shop I’m being inspired by when I talk about my fictional venues.

When I saw the proposed cover for Making Wishes at Bay View, I fell in love with it immediately and absolutely wanted to use it, but there was a moment’s hesitation because it clearly shows a river and Whitsborough Bay doesn’t have a river. Then I laughed at myself for putting up a barrier that didn’t need to exist. After all, Whitsborough Bay is a figment of my imagination and there was absolutely nothing stopping me from adding in a river if I want a river. So I did. With a huge nod to the gorgeous coastal resort of Whitby up the road, I added in a river below the castle on the South Bay side of Whitsborough Bay, over which I placed a swing bridge. I could never have done that if I had used a real-life setting. 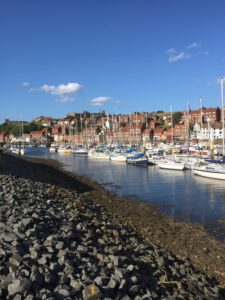 The River Esk in Whitby

Set back from South Bay in Scarborough is the Old Town – an eclectic mix of styles of old cottages, townhouses and guest houses. Whitsborough Bay has the same only the river runs through the Old Town now and I don’t see it as being Scarborough; I see it as a blend of all the old towns on the coast with their old quirky properties. 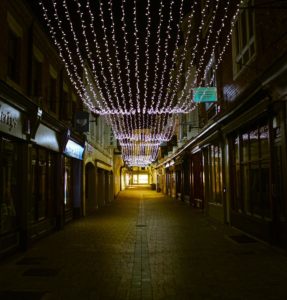 In Scarborough, we have the town centre set back from the coast, which is mirrored in Whitsborough Bay too. The second book in the Welcome to Whitsborough Bay series, New Beginnings at Seaside Blooms, is set in a florists’ shop on Castle Street. Several of my books – including all my Christmas ones – are set on Castle Street which I describe as a cobbled street full of independent shops and cafés. I imagine it being positioned where Scarborough’s Bar Street is but the inspiration for the look and the buzz of Castle Street is very much an amalgamation of Bar Street and the gorgeous cobbled streets of Whitby and Robin Hood’s Bay, which are packed with independently-run businesses. Having been an independent retailer for a couple of years myself, I’ve been able to bring in my knowledge and experiences of the highs, the lows, and the supportive community that can build (or the lack of support that can fester) amongst independent retailers.

I have now lived in Scarborough for over fifteen years and am a regular visitor to Whitby and the surrounding towns and villages. I feel so lucky to live here, close to the sea and surrounded by countryside. I think this passion for my local area does come across in my books. I’m very excited about the addition of the river to Whitsborough Bay as the cogs are already whirring in my mind of new stories that can be set on and around the river.

Will I ever write a book set outside of Whitsborough Bay? Yes. And I already have, but it is very much linked to Whitsborough Bay still. It’s just that the particular storyline for that book needed somewhere a little more rural but that in itself has opened up many more possibilities. I don’t think I’ll ever tire of Whitsborough Bay and the surrounding area, especially as I can keep adding bits to it – like the river – as and when new ideas spring to mind.

If you’ve read my books, I hope you’ve loved the setting and, if you haven’t yet done so, then a very warm welcome to Whitsborough Bay!