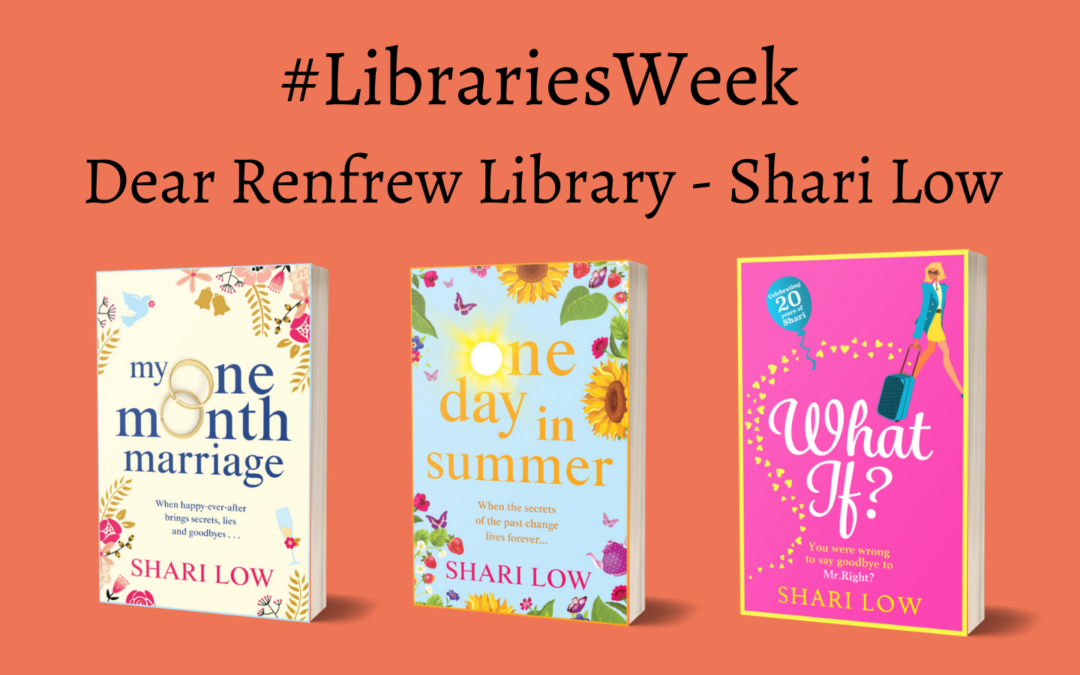 There are many “firsts” from my youth that I remember as clearly as if they were yesterday. My first kiss – behind the youth club shed and I burned with embarrassment for a fortnight afterwards. My first crush – David Cassidy and no, Donny Osmond didn’t even come close.

Up there with the most memorable events is the day I got my very own library card. It was a little cardboard square, later to be laminated, and I treasured it like it was a ten pound note.

I was a child of the seventies. We only had three television channels and a record player that jumped every time someone walked past it. For years I thought all singers had hiccups.

There were no video games, no internet, no climbing walls and an indoor ski slope would have been considered a wild figment of our overactive imaginations.

Instead, we had Renfrew library. At five years old, I was in awe of the surroundings. The quiet. The calm. The rows and rows of books filled with wonderful pictures and words I couldn’t yet read.

But now I had my library card and I wasn’t afraid to use it.

Over the next few years, I would visit twice a week, taking out more and more advanced books, proudly handing over my card and watching as the lady behind the desk stamped the front page with a return date that bore no significance because I’d be back a few days later, books read, anxious to swap them for another pile of escapism.

I’d carry my heavy tower of fiction the couple of miles home and back, developing my mind and the super-toned biceps of Popeye at the same time.

Entire summers were spent hanging out with the adventurous characters in my books, kids who today might spend their time sitting inside playing an Xbox rather than searching for a kidnappers, thieves and smugglers.

I was enraptured by their exploits, even if they made me feel woefully inadequate because I’d never had the inclination or opportunity to track down a dastardly robber.

Books began to have a real influence in my life. Thankfully, my parents resisted my demands to be sent to boarding school after my first jaunt to Malory Towers.

And similarly, my insistence that I was going to become a private detective after my fleeting obsession with the Nancy Drew mysteries was treated with underwhelming indifference.

I’d love to say I then progressed to the classics, but that would only be true if that term was expanded to include the complete works of Crackerjack, anything by Judy Blume and the Charlie’s Angels Annual of 1978.

In the late seventies and early eighties, we may have been rich in shoulder pads, but we were sadly lacking in young adult fiction compared to today’s choices.

My teenage years took a turn for the serious, with George Orwell 1984 and Harper Lee’s To Kill A Mockingbird being two stand-outs on my book shelf.

However around my mid teens, there was a massive leap on my reading roadmap that landed smack bang in the middle of Jackie Collins Boulevard, with regular diversions to Sydney Sheldon Street via the Judith Krantz highway and the Shirley Conran flyover. I like to protest that reading these books at such an impressionable age left no permanent mark on my psyche, however, I remain convinced that I’ll be swept off my feet at any moment by a billionaire playboy mogul called Lance.

It was around this time that the library became so much more than just the place I went to fuel the imagination.

I’d spend endless hours there, in the solitude, peace and quiet, studying for exams. When I was trying to decide what to do with my life, I would sit in the reference section, poring over huge career directories, never finding anything that would appeal more than the entry under ‘W’ that detailed the tantalising aspects of being a writer.

The seeds of that dream would never have been planted if it hadn’t been for the library. That building in Renfrew mapped out my future and today, decades later, I’m still regularly to be found in the corner of a library building, tapping out my next novel on my laptop, or talking to reading groups and aspiring writers. When my own teenagers were small, I took them to the library regularly and instilled in them a love of reading that I hope will stay with them throughout their lives.

Libraries are no longer just temples to the written word. Now, they have IT facilities, mother’s groups, children’s reading sessions and author events. They are the hub of the community.

Their importance cannot be underestimated – because even in a society where everything is available at the click of a mouse, a library is more than just a building – it’s the entry point to tens of thousands of other worlds just waiting to be explored.

My affection for David Cassidy and fictional blokes called Lance eventually subsided, but my love for the library that shaped my future will last a lifetime.