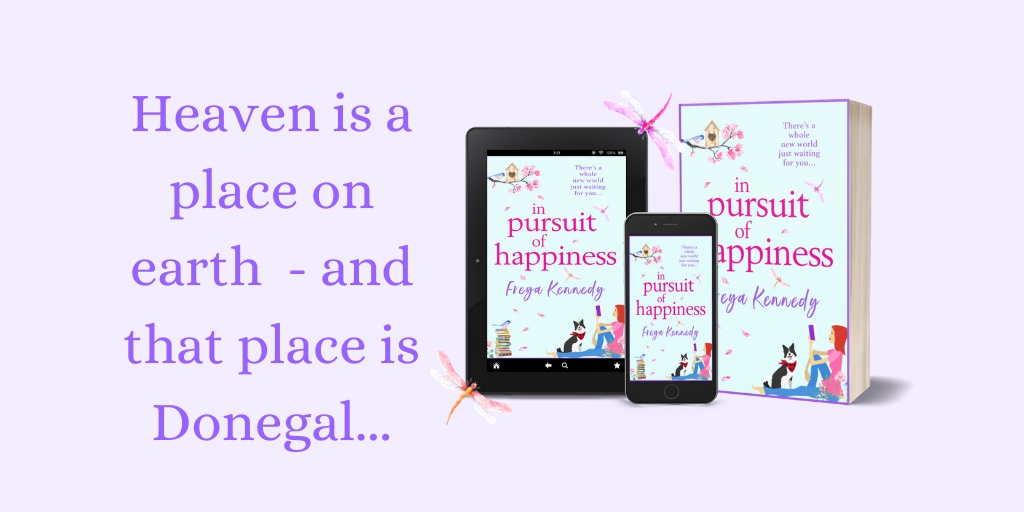 Heaven is a place on earth, and that place is Donegal

One of the very many great things about living in Derry, in the North West of Nothern Ireland, is our proximity to one of the most scenic places in the world – County Donegal.

Just across the border into the Republic of Ireland, Derry and Donegal sit side by side. In the darker days of our past, travelling to Donegal would involve passing through a heavily armoured army check point. Guns would point in our direction as we made our way to or from a day at the seaside. The long queues on the way home from the beach in the 80s, with four of us children in the back seat of the car exhausted and sunburned from our day’s adventure were never fun.

But now, travel between the two is marked with a change in the traffic signs from miles per hour to kilometres, signs that in both Irish and English and – if you know where to look – a marker in remembrance of a past atrocity.

Viewers of Derry Girls, which features in ‘In Pursuit of Happiness’ might also be aware that a different currency to sterling is also used across the border. In the 80s and 90s (as in the exceptionally popular TV show) this was punts – and there wasn’t a family in Derry that didn’t have a separate punt purse for such excursions. Now, in more modern times, it’s the euro.

Practicalities aside, you might well ask what is so appealing about Donegal and in In Pursuit of Happiness, Jo is tasked with showing off some of the county’s most inspiring spots to fellow writer Ewan McLachlan.

First of all, even from the far side of Derry, you can be in Donegal, and indeed at a beach with your feet in soft, golden sand, in half an hour. And that’s in heavy traffic.

To know that such beauty is so close, and that when the need to reconnect with nature is needed, it is incredible to know you can be dipping your toes in the sea in such a short period of time. (Travellers be warned, the water is always cold. Very cold!)

The first town you encounter after crossing from Derry is the sleepy seaside town of Buncrana (occasionally jokingly called ‘Funcrana’ by the locals).

It’s a small town with an incredibly busy Main Street – where each year they hold an annual festival of music, dance and the arts.

But even outside of festival time there is a lot to bring visitors to Buncrana. A series of quirky shops, traditional Irish pubs, and newsagents which sell the best soft whip ice-cream are all worth a visit.  And if you get hungry, grabbing a bag of chips from The Four Lanterns (which has been open for as long as I can remember) and taking them round to the shorefront is bliss.

There are a number of shore front walks, leading away from the city and further North. In my book, Jo and Ewan visit Fr. Hegarty’s Rock – the site of the beheading of the Catholic priest in 1711 during penal reform.

Legend has it that his head bounced eight or nine times off several rocks before landing, where the patches of land are said to show no signs of greenery since.

As gruesome as that may sound, the walkway along the coast which passes the rock is stunning. On a bright warm day, the sun shining on the surrounding gorse bushes releases a coconut-like aroma into the air. The water glistens clear and blue and you’d be forgiven for feeling you were away somewhere much more exotic.

And it doesn’t get more exotic than the Planet Ahch-to – a location featured in Star Wars, The Last Jedi. You may wonder what Donegal has in common with a fictional planet and Jedi Knights, but scenes from the 2017 movie were filmed at Malin Head, Ireland’s most northerly point which is in Donegal. Mark Hamill as Luke Skywalker and a host of other cast members caused much excitement when they arrived in the wilds of Donegal to film – but nothing caused as much excitement as seeing a life sized Millennium Falcon recreated for the movie. It could be seen for miles and it’s no surprise that hoardes of Star Wars fans flocked to the county to see it.

While the Millennium Falcon no longer dominates the skyline you can take part in a Star Wars walking tour or, if relaxation is more your thing, you can visit Farren’s pub at Malin Head which has a host of Star Wars memorabilia.

In honour of the film, one of the roads in and out of the area has even been renamed the R 2D2.

But if Star Wars geekery is not your thing, Donegal can offer you so much more. For the active, there is golfing, fishing, sea swimming, hill walking or horse-riding. For those just looking to kick back, there are countless luxury hotels and resorts scattered around the corner – including Lough Eske and Harvey’s Point (which happens to feature in Jo’s story).

Evenings in country pubs with traditional music can be followed by walking along the beach in the morning to blow the cobwebs away and I’m not sure what exactly they put in the air in Donegal, but you’ll never sleep as good or enjoy your food as much.

It really is a little piece of heaven on earth – and so close to Derry that it’s the perfect spot to enjoy the very best the North West of Ireland has to offer.

Click on the banner below to see more of Freya Kennedy’s book – available in ebook, audiobook and paperback.