Edinburgh and Me – Alex Coombs 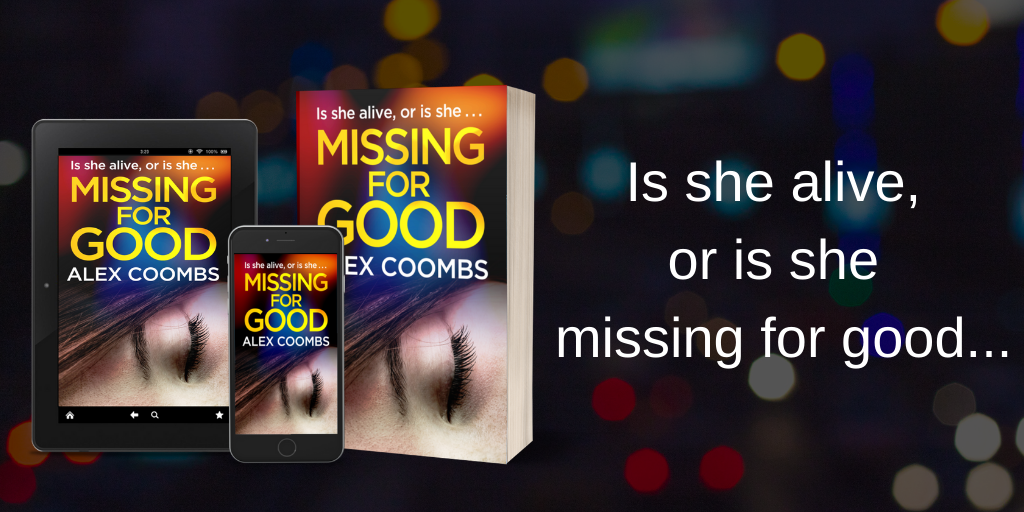 Edinburgh University, where most of the book, ‘Missing for Good’ is set, is currently back in the news. There’s been a controversy over the name of one of its buildings, ‘The David Hume Tower’ ( after the famous philosopher and leading light of the Scottish Enlightenment) and its subsequent re-naming to 40 George Square (which makes it sound rather like a new restaurant trying to be cool).

It’s a building I knew well, in an institution I also knew well.

I first went to Edinburgh in 1980. At school, I had done well academically and the year before I had gone up to a college at Oxford University to study Arabic. I was highly opinionated and, simultaneously, woefully ignorant of pretty much everything. I was a rebel, in my own eyes, in reality, a dick! I got chucked out of Oxford after a term. It was entirely my own fault.

Faced with the daunting prospect of either finding a ‘proper’ job – as opposed to what I’d done in my gap year, clean toilets in a hospital, something I was very good at – or continuing my education, I re-applied to universities chosen on their geographical distance from my furious father and wound up at Edinburgh, safely situated four hundred miles from home.

My new home for the next four years.

The first thing that a visitor from the South notices about Edinburgh is that it’s noticeably colder. This doesn’t really matter so much during the summer but as the autumn progresses and winter arrives, you are acutely aware of the fact that the north wind is absolutely freezing. Add in some icy rain to the mix and walking around the city it can feel like an iron band is tightening around your head.

The other noticeable thing about Edinburgh is that it is a very grey city. That is the predominant colour. The New Town is grey, the Castle is grey, the Bridges are grey and the skies are usually grey. It’s quite monochrome. It would not be true to say all of it is, parts of it are built of different coloured stone but think grey and you won’t go too far wrong.

I lived there for four years, studying not very hard for my degree. My Edinburgh world was one of student flats, these were mainly concentrated in the Marchmont area of the city, which is a pleasant kind of Boho suburb a short walk away from the university across a park called the Meadows. Student flats, located in tenements, were generally freezing in winter. Like most of the tenement flats they were relatively high-ceilinged with large rooms and rudimentary heating, so they were bitterly cold. My fellow students tended to be really slobbish, never cleaning or tidying anything to a startling degree. The film, Withnail and I, with its depiction of horrible squalor, was like a piece of cinema verité, photo realism, for the way my friends lived.

Some of my friends lived in the New Town, which lies on the North side of Edinburgh, a short walk from Princes Street. It’s called New because it was a radical building project round about the beginning of the nineteenth century. I lived at the bottom of the Lothian Road, a few miles away and I often walked from there to Stockbridge in  the New Town where I had friends, via the Castle and the city centre. This would take me an hour or so.

There were buses but, chronically short of money, I preferred to walk. In the days before mobile phones and digital information boards at bus-stops, you could be in for a long wait before a bus showed up, so on foot you were at least making progress.

The walk too was fun. Like all good walks, it was a series of defined stages. Up the Lothian Road, tedious and long and straight, past the Commonwealth Pool and along grotty South Clerk Street, cutting through the university in Buccleuch Square, where my department, that I consistently failed to show up at for lectures and tutorials, was located. Past the library building. I liked the library, I didn’t do any work there but I had discovered that the English Literature section of it had a really good selection of modern (ish) writers. I read a huge amount.

Past the tower bearing the name of the now disgraced David Hume, past the Gothic looking student union which I only went into once in my four years. Past the seventies built Potterrow student bar that I had been in a few times, which I remember as looking like a concrete igloo. It was/is a truly horrible building, it had an atrium with a banana tree inside that struggled in its alien and uncomfortably cold environment, it always looked ill, homesick for wherever banana trees grow, as unhappy in its way as an animal stuck in a zoo, pining for its natural habitat. The bar had a really low ceiling, in contrast to everyone’s flats, and was really dark and claustrophobic.

Then past Greyfriars Bobby, a small statue to a loyal dog, and past Chambers Street Museum that I never went into in my four years in Edinburgh as  a student, and the Royal Mile with its cobbles, Castle at one end, Holyrood House at the other. Another two places on my list of famous sites never visited.

From the Royal Mile, near the baroque and beautiful Bank of Scotland headquarters, you get the most wonderful view out over Princes Street and Edinburgh. The Castle and the Bank are floodlit at night and you can look down onto Princes Street Gardens, the Scott Monument like a stone replica of Thunderbird Three, and the rectangular roof of the Scottish National Gallery, one of the few places I did go in.

Then down the Mound, up the other side, crossing plutocratic George Street, where, back in the mists of time there was an incredibly swanky Japanese restaurant. A thing of awe to us students, Japanese ? Nobody knew anything at all about Japan. Chinese food was relatively new on the block, let alone Japanese. What did they even eat ? Sushi was unknown. It was reputedly insanely expensive, you could spend £50 on a meal ! That’s what an average student lived on for a fortnight.

Then down, past the ornamental gardens behind railings to keep the riff-raff like me and my friends out, down into the New Town.

Edinburgh is a superb place for walking. It’s a very compact city, everywhere you probably want to visit is located in a few square miles.

Looking back, I sometimes wonder what I did when I lived in Edinburgh for four years, other than not study. As students we didn’t watch tv, a tv was an expensive luxury item, like a telephone, or a car, that belonged to parents, not students. I mainly read and listened to music at friends’ flats. When I say read, it was mainly novels, poetry, not textbooks. I didn’t read newspapers, the only print material I looked at was Sounds and Melody Maker, occasionally the NME, but the NME was too political.

Politics passed me by. When the Falklands War broke out, I was only dimly aware of it, I was much more concerned by discussions about Echo and the Bunnymen. I loved (and still do) Crocodiles. Iggy Pop, Bowie, early Simple Minds and Talking Heads. Politics was simple, Thatcher was bad, nuclear energy was bad. The Sandinistas were good, we knew this because the Clash said so, and they had released a bloated triple album to hammer the point home. Joe Strummer’s untimely death at least stopped him seeing Daniel Ortega turning into a bloodthirsty dictator.

After I graduated ( I managed to scrape a degree) I worked in Edinburgh for a while. I was a barman in a village just outside Edinburgh called Cramond. We lived just off the Gorgie Road, near Hearts Football Supporters’ club, in a horrendous flat on the ground floor where the exterior ledge of our bedroom window provided a useful support for inebriated supporters, waiting for their bus to come at the stop round the corner, to lean on as they threw up noisily and at length on the pavement outside. The flat opposite ours on the ground floor was home to a kind of delinquent family who would use the stairwell as a kind of alfresco seating area to conduct shouted, sweary conversations with each other, the echoing acoustics of the granite stairwell perfect for amplifying the shouted obscenities at one a.m. ‘Effing this…effing that…’ from inside the tenement and ‘BLEEEUCHHH’ as a kind of vomitory counterpoint from outside.

Then we moved to a shabbily genteel street on the outskirts of Leith, once the dock area of the city, now slightly gentrified, which was much nicer. It boasted possibly the worst fish and chip shop in Edinburgh. The owner handed out complementary chips to people in the queue. Nice touch, I thought, the first time I went. Clever too, people will order more. I bit into my free chip, it was truly disgusting. That distinctive taste of rancid fat, really old rancid fat from a rarely cleaned deep-fat fryer, with that burnt charcoal top-note that you get from carbonised bits of food floating around in oily sludge.

Edinburgh chip shops, good, bad and indifferent, all offer, not salt and vinegar, but salt and sauce, which I believe is brown sauce let out with vinegar so that it’s runny. It’s very much an acquired taste.

I got a job teaching English to Italian students who were over in Edinburgh for a summer school. We had teaching in the morning and excursions in the afternoon. It was only then that I actually visited the Castle which had loomed in a Kafka like way, always there, always unattainable, for my four student years. And Holyrood House, and John Knox’s House, Arthur’s Seat ; quite a long list really.

Then I moved away, working abroad for some years and then living in London and the Chilterns. But my wife is from near Edinburgh and so I was always visiting. These days, I am there quite regularly and it doesn’t seem to have changed very much. There are new things  of course. The controversial tram line, the redevelopment of the horrible St James Centre at the top of Leith Walk, the messy Scottish Parliament building that looks like a forward-thinking Uni Halls of Residence from the early seventies. For sure, if I lived there more regularly I would notice more changes.

And now, I’ve come nearly full circle and making plans to return there to live. I can visit the Scottish National Gallery, the Modern Art Gallery. There is an Antony Gormley statue standing in the Water of Leith nearby, and I can still listen to Crocodiles.

And at night I can walk up to the top of Frederick Street and stare at the floodlight splendour of the Castle.

Some things are timeless.