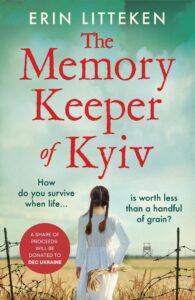 My fascination with Ukraine sparked at my great-grandmother’s knee, listening to the tales she wove of both her life there and the perilous journey she, my great-grandfather, and their three children made to escape the approaching eastern front during WW2.

Even though she died before I was old enough to ask the important questions and flesh out those stories, that fire was ignited. As I grew up, I felt pulled more and more towards Ukraine and its complicated past. I wanted to understand where she came from. I wanted to know what she saw. What she experienced. What she lost.

I read, researched, and peppered my grandfather and great-uncle with endless questions. I planned on writing a novel loosely inspired by their stories, but as I learned more about the Holodomor, Stalin’s man-made famine that killed an estimated four million Ukrainians in the 1930’s, I realized I wanted to write a book about that first. Very few people I talked to knew about it, and of those, many didn’t understand the scope of devastation or Stalin’s true intent.

For so many years, the Holodomor was hidden from the public. Census records, and the people recording them, were destroyed. Journalists were paid off or refused access to Ukraine. Even speaking or writing about it in a diary was a ten-year prison sentence. The Soviet government conducted a massive cover-up, and it worked. The Holodomor faded from memory for all but those who had suffered through it. Even today, the Russian government denies that it was a forced famine, ignoring the brutal decrees directed solely at Ukrainians.

I wanted to bring that tragic piece of history to life and give people a way to easily access it–to inspire a bit of interest in hopes that they’d want to find out more. I wanted people besides Ukrainians and those of Ukrainian descent to know and to remember.

Now, that goal seems more important than ever. The old adage, “history repeats itself,” is a cliché but that’s because it’s often true. We’re seeing that today in Ukraine as Russia continues this cruel and unnecessary war. Knowing what came before puts the present in a whole new context. It helps us to understand, in part, why Ukrainians defend themselves so fiercely, why they’re so unwilling to give up anything to the Russians.

This is not the first time. Ukrainians have been fighting for the right to exist for centuries.

I’ll never know the full story of my great-grandmother’s life or which parts were truth or hyperbole. But, I can learn to speak the language she whispered to me when she held me, and I can travel back to the village she left in 1944. I can preserve her precious heirlooms, pass them down to my children, and tell her stories. I can research and try to fit my family into the history I find.

I can imagine, and I can write.

But, I’ll never stop wishing for one more conversation with her.