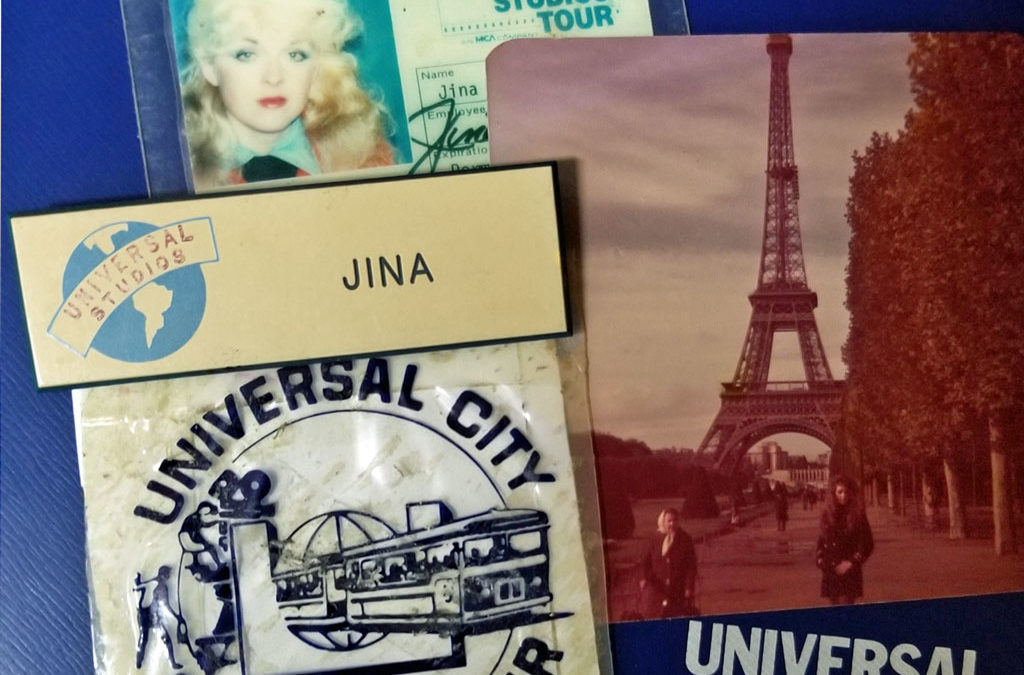 How an old photo and my gig as a film studio foreign tour guide inspired me to write The German Officer’s Girl.

It was a bright, sunny California day on the job for me as a foreign tour guide at Universal Studios when Bruce the Shark nearly ate my German tourist.

I’d warned the man from Munich not to lean over the side of the Glamor Tram, but he wanted to get ‘the shot’. He barely escaped the animatronic shark’s sharp jaws as the tram barreled over the bridge on the studio backlot and the 25-foot long, six thousand pound shark leaped out of the water and…

Well, his camera wasn’t so lucky.

It flew out of his hands and landed with a splash in Jaws Lake.

I had many wild adventures during my time at Universal (I was hired as a French and German tour guide), doing crazy stunts against a green screen on the special effects stage (I had to fly like Superman), singing songs on the tram with the tourists, fumbling over film phrases hard to translate. I learned a lot about the film business. That was my job. Take tourists on a magic carpet ride through the world of cinema from the early days of the silents to the studio’s latest films and TV shows.

I’ll never forget a rainy afternoon exploring soundstage 28 where an exact replica of the Paris Opera was built and Phantom of the Opera was filmed circa 1925 starring silent film star Lon Chaney. I love the silents and swear I saw ghostly images everywhere. When I wanted to write a story about a French silent film actress, Sylvie Martone, and what she did during the German Occupation, I called upon my knowledge and experiences as a tour guide.

To fully understand Sylvie’s arduous path to stardom, I began my story in a little town outside Paris in 1926 and followed the ups and downs of the career of this brave woman. Then in 1940, her life changes when she has to make a choice.

Collaborate with the Nazis? Or take on a dangerous deception that could cost lives, even her own?

And so The German Officer’s Girl was born.

From there, I drew on several incidents in my life, including my love of Paris since I first visited there years ago as a young girl, my fling with a boyish lieutenant in the German Army when I was a university student, my experiences as an actor, and a childhood memory of a lovely, dark-haired woman who taught me how to dance.

Years later, I found a sophisticated photo of her wearing a pearl necklace and a fur stole and discovered she was a professional ballroom dancer who performed on the circuit in nightclubs and cabarets. My grandmother died when I was a child, but I never forgot how she taught this little girl to tap dance.

Finding the photo sent me thinking about how we’re losing that ‘ah ha’ moment of discovering someone lost from the past… a face caught in a moment in time just begging for us to ask them who they were, find out their secrets. How everything now is digital when it comes to film, and how someday there won’t be any ‘old photos’ to find.

That thought prompted me to send Sylvie Martone’s granddaughter, Juliana, on such a quest when she finds an old photo of a glamorous woman she never knew existed buried among her late mother’s possessions. She questions why her mother lied about her family in France… as she uncovers the choices Sylvie made to survive when the Germans came to Paris.

I hope you’ll come along on her journey with me.