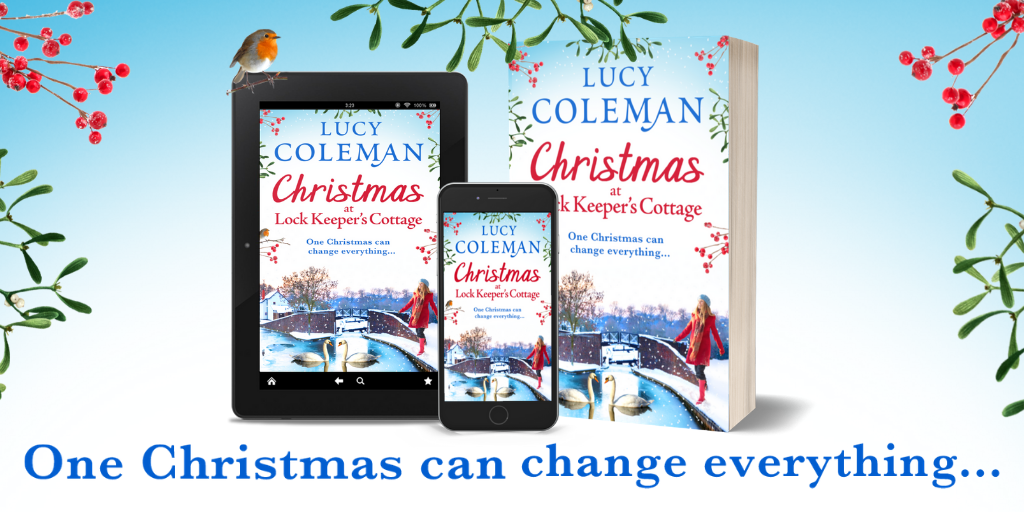 What Inspired the Setting for Christmas at Lock Keeper’s Cottage.

It was probably about seven years ago and my husband, Lawrence, and I were living in a converted barn in the small village of Arlingham, in Gloucestershire. It nestles on the edge of the Cotswolds and has views out across the Severn. It’s situated on a horseshoe bend in the river and is surrounded by lush pastureland, farms, and a small network of lanes where you will discover cottages old and new.

The walks are a delight and it’s a treasure, being a little off the beaten track. It even has its own pub – The Red Lion, which was purchased by a group of villagers who clubbed together to save it from being closed. And a village hall and small post office in the high street.

To reach Arlingham you drive through a place called Frampton on Severn, another delightfully quaint, although much larger village which has the largest village green in the UK. It has three ponds and a cricket green, which is marvellous in summer. The Bell Inn sits alongside and is a wonderful place to eat.

On the way down to the river, you also drive over the swing bridge at Fretherne, to cross the Gloucestershire and Sharpness canal. The kids always loved it whenever we arrived just as it was about to lift, and we’d get out of the car to watch the narrowboats as they chugged by.

Often, we would drive to Saul Junction Marina, which is where the Gloucestershire Canal meets the Stroudwater Canal. And it was there that the idea for Christmas at Lock Keeper’s Cottage began. One Christmas we did get to join Santa for a cruise along the canal and it was a treat our family will never forget.

We only lived in Arlingham for three years but one Christmas the snow fell and kept on falling. It wasn’t easy getting around as the lanes are narrow, but the farmers were out on their monster tractors ploughing the snow in the early hours of the morning, so we didn’t get cut off.

While the Lock Keeper’s Cottage is fictional, as is Aysbury Junction Marina, it was inspired by Saul Junction and its surrounds. And the sense of community conjured up in the storyline reflects experiences we’ve had living in several close-knit little villages that were tucked away. Another such place was Huntingford, in south Gloucestershire.

Life is different in out of the way little places. You get to know your neighbours and yes, people still knock on the door to borrow the odd cup of flour, or sugar. And there are situations that arise where someone will phone a friend and in no time at all someone pops in to sort out that domestic emergency.

On one occasion, the vehicle I was driving hit black ice and I ended up in a ditch alongside a narrow lane. Within five minutes a neighbour appeared to help me, in my shocked state, out of the vehicle. I was driven home, less than five minutes away. They rang my husband and waited with me until he arrived back.

In the meantime, I was totally unaware that a local farmer had sent a tractor and two of his men to pull my trusty little Jimny back onto the road, ready for the recovery vehicle to take it to the garage. So, while villages often look sleepy, whenever anything happens people always appear as if from nowhere, to lend a hand.

In creating Aysbury Junction Marina, I took myself back to some extremely happy times as the story began to unfold and, hopefully, reflect the way newcomers are welcomed with a generosity of spirit. And if you get a chance to take a trip with Santa on a canal at Christmas, I promise you that it’s not only the kids who will have fun!

Pick up your ebook, audiobook and paperback of Christmas at Lock Keeper’s Cottage by clicking here or on the cover below.