Meet the characters in T. A. Williams’ brand new book Murder in Tuscany! 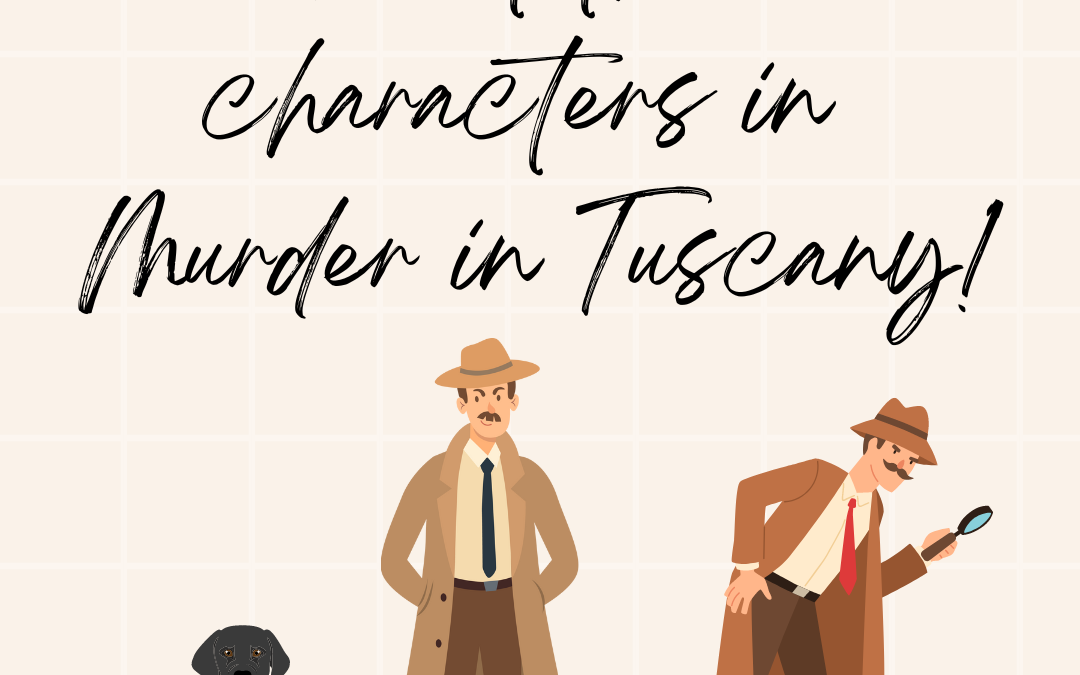 Share this:
Meet the characters in Trevor Williams Books brand new cozy mystery #MurderinTuscany! Keep reading to meet our key players … 🔎
1. The main character is Dan Armstrong. He is 55, still in pretty good nick, and he has recently retired from his position as detective chief inspector at the Metropolitan police. He is just over 6 foot tall, dark haired and still very active. His grandmother was Italian and he has been studying Italian at night school on and off and so is already pretty fluent when he arrives in Tuscany. He left the police in an attempt to win back his wife who left him, mainly because she realised (even if he didn’t) that he loved his job more than he loved her. In the course of the series he gradually comes to realise that it is all over between him and his wife and he gradually allows himself to consider hooking up with another woman. Deep down he knows that his wife was right: he is a detective through and through and he’s very good at his job. His best (human) friend in Italy, Virgilio, suggests he should set up his own investigation agency and in the course of the series that’s what he does. He finds that he loves Tuscany so much he decides to settle down over there now that he and his wife have irrevocably split. With him is his faithful black Labrador, Oscar, who rapidly becomes his very best friend in all the world. See below.
2. Virgilio Pisano. A friend at the Met gives Dan an intro to a police inspector in the murder squad in Florence and this man, Virgilio, rapidly becomes Dan’s best friend here in Italy. He speaks reasonable English but he enlist Dan’s help in investigations initially for the language but soon he develops considerable respect for Dan’s investigative ability. He is five years younger than Dan (50) and happily married to Lena. He and his wife are very hospitable to Dan and a real friendship develops. He subsequently involves Dan in future investigations and the two of them work well together.
3. Oscar. Oscar is a black Labrador. He belongs to the murder victim (Jonah the self-important sex pest bestselling author who is murdered in Murder in Tuscany) and after his master’s death, Dan inherits him. Their relationship is almost human/human and Dan often finds himself discussing things with the dog (who is a very good listener). The dog also has a sense of when people are unhappy and he offers a bit of canine support. Like most labradors, he is obsessed by water and he even (accidentally) knocks Dan into the swimming pool fully clothed in the book. He reappears in all the books and manages to save Dan’s life on more than one occasion and even help with the investigations.
Intrigued? Pick up a copy of Murder in Tuscany and start reading today! ➡️ 🇬🇧 https://amzn.to/3QORUZq 🇺🇸 https://amzn.to/3RbAPbS