THE MERRY MONTH OF MAY IN MONTE CARLO – JENNIFER BOHNET 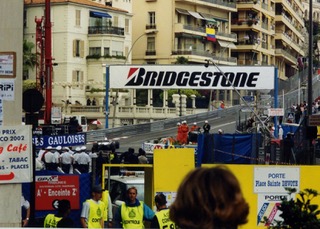 THE MERRY MONTH OF MAY IN MONTE CARLO 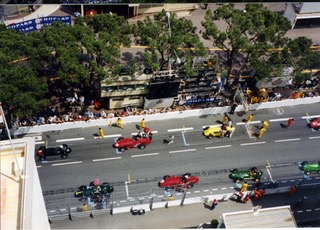 For eleven months of the year the Principality of Monaco is a dream tourist attraction, during the month of May though, everything changes as the count down begins for the biggest event of the year – F1 Grand Prix of Monaco/Monte Carlo.

The preparations begin weeks before at the beginning of April when teams of workmen begin delivering the crowd barriers, fences and other street furniture needed to keep both the drivers and the public safe from the F1 cars that reach up to 180 miles an hour around the famously narrow streets.

Not designed for modern F1 cars, or any racing car really, it’s the combination of tradition, the ambience of the Cote d’Azur and the historical and challenging street circuit that has ensured the survival of the Monaco Grand Prix – it’s the race every driver wants to win.

The week leading up to Grand Prix weekend is when the drivers, their cars and their enormous motor homes arrive, and the harbour is filled to capacity with the luxury yachts of the rich. Residents with homes and balconies that overlook the circuit can find themselves popular with sponsors or the owners of the various F1 teams, wanting to rent them for entertaining. We had a good friend whose apartment over-looking the starting grid was in great demand and regularly rented out to various F1 personnel. For three years my husband was roped in to help with the catering and to man the bar. A keen F1 fan, every year he was happy to sleep on a blow-up bed for three nights, get up early to help prep lunches for the weekend and make sure the fridges were stocked with enough champagne. Champagne that was needed in abundance the year that a major oil company who were sponsoring McLarenrented the apartment and David Coulthard won the Grand Prix for the team. The atmosphere in the apartment that year was apparently something else!

Wedged between the Mediterranean Sea and the Maritime Alps, the Monte Carlo Grand Prix It is unique in many ways, not least that the circuit is virtually the same as it was back in 1929. Drivers are literally taking the same corners lap after lap as the famous drivers of the past – men they probably grew up watching, wanting to imitate. Every two years, and a fortnight before the main Grand Prix, Monaco also holds the Vintage Grand Prix where races are held featuring cars from before the war through to the 1980s. We were both invited to a private party one year for the Vintage Grand Prix which was great fun and not nearly as noisy as the main event!

Monaco/Monte Carlo is a glamorous place all year round with its fairytale castle perched on its rocks, the super yachts in the harbour, the luxury cars that line up outside the Casino but when the F1 boys roll into town with their super-charged cars the party atmosphere is one of high-octane anticipation.

The date for the 2021 Monaco F1 Grand Prix is 20th – 23rd May and there is also a Vintage Grand Prix weekend scheduled in for 23rd – 25th April. Hopefully both these events will be able to take place.

Click on the banner below to see more of Jennifer’s books – available in ebook, audiobook and paperback.