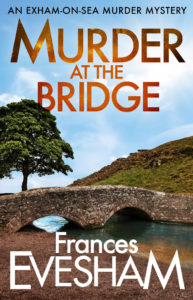 Read on for an exclusive extract from ‘Murder at the Bridge’ by Frances Evesham.

MURDER AT THE BRIDGE

An Exham on Sea Mystery

Libby Forest dropped into a wooden chair, exhausted. She’d spent the afternoon on tenterhooks, half-expecting an unforeseen disaster to ruin the wedding at Wells Cathedral, but the ceremony had passed without a hitch. Now, in a sturdy marquee pitched in a field, the reception was underway. The level of excited chatter rose as guests finished their meals, nibbling cheddar cheese and biscuits, their stomachs full of Somerset beef and local apple pie. The temptation to giggle grew until it was almost irresistible and Libby had to turn it into a sneeze.

Max Ramshore, even more handsome than usual, squeezed her hand. ‘Are you coming down with a cold? Or is it an attack of maternal emotion at seeing your son marry?’

‘Neither. It’s pure relief. I can hardly believe the wedding’s over and everything went well. I’ve been expecting the worst all day.’

‘Don’t count your chickens. Remember what happened at the Oscars. Nothing’s over until it finishes.’

‘That sounds very cryptic,’ Libby said, ‘but at least Bear was on his best behaviour.’ Libby let her fingers sink into the warm fur of the huge Carpathian sheepdog by her side. ‘He didn’t smell the cathedral cat and chase him down the aisle. He thinks cats exist on this earth for his personal entertainment. I hope no one’s planned any practical jokes.’

Libby took a moment to gaze round the marquee. The happy couple looked radiant, the service had been touching, and old friends of the bride’s family had filled the cathedral. Libby, still new to Somerset, had fewer guests to invite, but the sight of a row of customers from the bakery in the congregation had lifted her heart. Even Mrs Marchant, the old lady who collected stray cats from the streets of Wells, had attended, her dress so old and lace-covered it surely counted as vintage.

Only Ali, Libby’s daughter, couldn’t be there, to Libby’s disappointment. Working on voluntary service in South America, she’d been nursing her boyfriend, Andy, through a nasty bout of pneumonia. He was on the mend now, but the improvement had come too late for Ali to get home, and she’d been forced to talk to her brother through an uncertain Facetime link, promising a visit to England as soon as possible.

Libby shot a glance at Mandy, her apprentice. Dressed in full Gothic splendour, including a tight black bodice and voluminous skirt, Mandy sat beside Reg, Max’s basketball-playing American colleague. Libby recognised Steve, Mandy’s ex-boyfriend, at the same table, and winced. Would he cause a scene after splitting with Mandy after a row in Wells Cathedral’s coffee shop?

Libby wriggled. ‘Did you talk to Reg? You know, about being too old for her?’

‘I most certainly did not. I thought we’d agreed she’s an adult and can look after herself. She’s having a ball with both her admirers in attendance. From the way Steve’s looking at her, all big brown puppy eyes, I think he’s hoping to get her back. They only broke up because she wouldn’t visit him in London.’

‘Couldn’t visit,’ Libby corrected. ‘She still has a phobia that stops her travelling by train.’

‘Well, maybe she could get some help. There are therapists, you know. Anyway, it’s not your responsibility. Just relax for once and enjoy your son’s wedding reception. The marquee’s full of people you don’t know, any one of whom may be plotting murder. Look.’ He nodded towards a small huddle of Robert’s friends. ‘Do you think one of those might be a candidate?’

‘Don’t even think it. I want a perfect day today, with no crises.’

Max wandered away, seeking out old friends, while Libby breathed a happy sigh, slipped her feet out of new, painfully high heels, and watched Sarah’s mother approaching. Belinda looked beautiful and voluptuous as always. In a powder blue jacket, navy shoes and wide brimmed hat, she would be every inch the serene mother of the bride, were it not for the tense lines on her forehead and the occasional anxious glance to left and right.

She sank into the chair next to Libby. ‘I know this isn’t the time…’

Libby suppressed a groan as she recognised the tone of voice. Belinda had a favour to ask. Libby’s fame as an investigator had grown locally, and she was approached in the most inappropriate places. At least Belinda hadn’t followed her into the ladies.

‘The thing is…’ Belinda swallowed and picked at the skin of her thumb.

Libby took pity. ‘Why don’t we have a cup of tea? Sarah and Robert are still circulating, so we’ve got time for a chat.’

Belinda visibly relaxed. ‘It’s a bit embarrassing. Confidential. I need to know you’ll be discreet.’ A hint of steel underpinned the words.

Libby hid a smile. Aside from marital problems, financial embarrassments were the most common reason people asked for private investigations. ‘Before you begin, is this an official request or are you asking as a friend?’

Belinda seemed taken aback. ‘Oh, I suppose it’s official.’ She’d probably been hoping for free professional advice, but experience had taught Libby it was best to establish from the outset that a formal private investigation carried a price tag.

The bride’s mother coughed and fiddled with an earring as she recovered her dignity. ‘I just need to recoup some money. I had a small legacy when my mother died a couple of years ago. I invested it, but the – er – the shares collapsed and I made a loss.’ She bit her lower lip. ‘I promised Sarah help with the wedding expenses. We don’t have much spare cash in the farm, what with the milk prices over the past year, so I didn’t want to worry Sarah’s dad about it, but soon I’m going to have to stump up the money.’

Libby offered a sympathetic smile, secretly intrigued. It was obvious Belinda was only telling half the story. Did she suspect she’d been cheated? Or perhaps she’d done something foolish. Had she been borrowing money from loan sharks?

Libby glanced over her shoulder. This wasn’t a good place for further confidences. ‘I’ll need as much detail as possible. Perhaps we could meet tomorrow and go through your accounts?’

Belinda chewed harder on her lip. Libby waited, giving her time. Max, her business partner, would be able to help with the woman’s financial problems. He was an expert in international fraud and money laundering, with a history of under-the-radar investigations. He could sort out poor accounting and advise on improved budgeting and wealth management, but Libby suspected Belinda’s problems extended further.

‘It’s a bit complicated…’ Belinda’s voice wavered as a man wearing a grey linen kaftan approached. Tall and striking, he stood out among the other guests, who mostly wore more conventional wedding clothes. Long grey hair was drawn back into a ponytail, and the man’s bushy grey eyebrows framed a strong face characterised by sharp cheekbones and a hooked nose. Belinda stiffened as he approached.

He smiled, but his light grey eyes peered intensely into her face. ‘Belinda, my dear. I haven’t seen you for a while. Thank you so much for the invitation to your daughter’s wedding, but I’m afraid my wife sends her apologies. Her mother is unwell. Nothing serious, but the old lady has a heavy cold and Olivia felt she shouldn’t be left alone.’

His words were commonplace, but the man’s effect on Belinda was electric. She jumped to her feet, cheeks reddening. ‘It’s a-a pleasure, Sandy.’ In the awkward pause that followed, Libby slipped her feet back into her shoes, stepped forward, and held out a hand. With a little start, as though recollecting her manners, Belinda said, ‘Let me introduce Xavier Papadopoulos. He’s a sort of distant cousin of mine.’

‘And you’re the mother of our handsome groom, Mrs Forest.’ He pronounced the name slowly, rolling it round his mouth as though tasting each syllable.

Unblinking, the man watched her face, his smile enigmatic. ‘Indeed.’ After an unnerving pause, he seemed to lose interest. The snake-like eyes re-focused on Belinda. ‘I’m sure we’ll have plenty of time to talk this evening, while the young people dance, Belinda.’

She cleared her throat. ‘I-I’ll look forward to it.’ The lie was obvious.

Without another word the grey man left. He strolled through the marquee with slow, measured steps, his back ramrod straight. Heads turned as he passed, as though his personal magnetism sucked in everyone within range. Libby breathed out, suddenly tired. ‘Your cousin’s a most unusual person.’

Belinda’s head turned towards Libby, but her eyes were vague. ‘I’m sorry. What did you say?’

Maybe she didn’t want to discuss the man. Instead, Libby made a suggestion. ‘Would you like an appointment? I’ll ask Max to come. He’ll help with your money worries. He’s something of a financial genius, and very discreet.’

Belinda let out a little gasp, grabbed her bag, and hurried towards the exit. ‘N-no thanks. Forget I said anything. It’s nothing really. I’ll talk to Mike and we’ll sort things out.’ She threw the words over her shoulder a she hurried away.

Libby’s mind seethed with curiosity. Why had the arrival of Xavier Papadopoulos upset Belinda so? Was it just that she was worried about being overheard?

Libby doubted that was the reason for the woman’s change of heart. Instinct told her Belinda was frightened of Xavier Papadopoulos.

Next moment, she’d forgotten about Belinda Carmichael. The atmosphere in the marquee had changed, the gentle hubbub of cheerful conversation died away. Libby rose, confused, as an angry voice carried from the far end of the marquee. Libby couldn’t make out the words. Then, her son Robert was at Libby’s side. ‘Sarah’s aunt’s causing an almighty fuss. She’s saying her ring’s been stolen. Can you come and help sort it out?’

Libby closed her eyes. Everything had been going too smoothly. She’d known something would go wrong.

We hope you enjoyed this extract. To read more, purchase the full novel here: https://amzn.to/3bABhMq