My next novel, Chasing the Sun – Judy Leigh 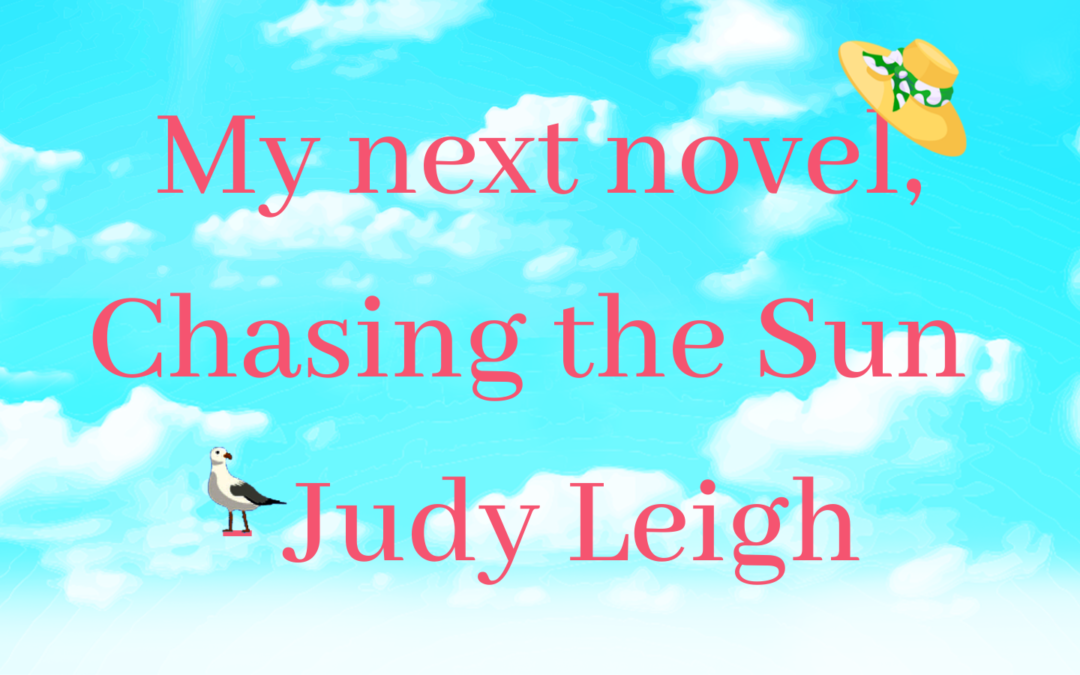 Originally given the working title The Hokey Cokey Woman, I set out to write a story about Molly, a seventy-year-old widow who leaps into situations with complete abandon, later realising that what she’s chosen isn’t for her and she should have considered all options and thought more wisely. But part of Molly’s charm is that she’s spontaneous; she is caring, full of positivity, enthusiasm and she has natural joie de vivre. In the novel, she finds herself in several situations that are the result of her impetuosity, because she acts before she has thought out the consequences. Although her spontaneity might be endearing, and she has boundless energy and enthusiasm, her life isn’t perfect: she’s always seeking something new, chasing something elusive, but she doesn’t always know what it is.

Nell, her half-sister, is a few years younger, wiser and more sensible. But when her own seemingly-solid marriage is in crisis, she appears on Molly’s doorstep, her world suddenly shaken.The husband who had become part of the fabric of her life wants something else and Nell is shocked that the comfortable existence she knew is in the past.

Molly’s reaction is to leap straight into a new adventure, to change the scenery in order to prevent Nell from further heartache, so she drags her off to Spain for a holiday. They have a wonderful time, although Molly’s impetuosity leads her into a few more scrapes, but they both make new friends and initially life appears idyllic. However, after a while, Molly has itchy feet and she yearns to move on and to discover more.

I am always interested in the themes of companionship and love, and how different people make different choices about whether to stay single or to choose to be in a relationship: loneliness can affect us all, whatever our age. Molly is a widow, she is independent and has learned to live alone, so she doesn’t stop to consider whether being single is a problem. Nell, however, has had a partner in her life for forty years: she hasn’t known solitude before and being by herself is a novelty. So what interests me in this part of the story is the way both women react to the choices of new love and friendship. Are friends needed to keep loneliness at bay? Is any partner better than no partner at all? Or can solitude and self-reliance be an alternative to loneliness: sometimes we find satisfaction in being alone, and sometimes we yearn for love and companionship. Both Molly and Nell face decisions about their future paths several times in the novel and their responses are very different.To live life independently or to accept a new partner, that is the question. As one character says, being single is not the opposite of being happy. And as the other suggests, once you have tasted champagne, why would you opt for flat lemonade? So the title Chasing the Sun is not simply about wanting to be in warmer climes, it is also about how the characters consider bringing warmth into the cold empty space of their own lives.

The setting of the novel was also an important choice. I began writing Chasing the Sun at the start of lockdown, having previously intended to go to Spain for a few days to practise speaking Spanish and to research the location. When the trip was cancelled, I researched the coastal area of Murcia online.

I’d been to Mexico several years ago and my son was living there at the time that I was writing the novel, so I took my character to a location and a culture where I had some background knowledge already, which was a useful starting point for research. I wanted to offer the reader the chance to experience vibrant, sunshine-filled locations and a rich cultural heritage as a form of escape from what had become the lockdown norm. My intention was that if we can’t go on holiday physically, then we’ll go vicariously, with a character in a novel.

To that end, I hope the readers will enjoy Molly’s voyages to the sunshine, and also I hope that they’ll like the exploration of the choices between independence, loneliness and romance, the life-choice options considered by Molly and Nell, two very different characters with very different experiences. Chasing the Sun is out in April.