My Own Christmas Romance by Lisa Hobman

In readiness for Together Under a Snowy Skye I was thinking about my own experience of romance at Christmas and I thought I would share with you how I met the love of my life.

I met my now husband Rich in a pub on a cold January evening in 1992. Not exactly the most romantic setting either. It was a heavy metal pub that we both happened to frequent but had never seen each other. On this particular night I had just come out of a very intense relationship and wasn’t in the mood for romance. My friend, however, was fed up of seeing me mope around and insisted I accompany her. Under duress I got my glad rags on and off we went.

As we sat there drinking and chatting, the door opened and in walked three young men. My jaw almost hit the floor when I saw the second guy: long dark hair, jeans and a checked shirt—typical 90’s attire. He looked like Joe Perry from Aerosmith and I’d had a massive crush on the rock star for some time. My friend saw me staring and asked if I wanted to be introduced. I said absolutely not! I just wasn’t ready for that, so we headed off to another pub.

Later on we arrived back at the first pub and to my amazement the gorgeous guy was still there. To cut a long story short our friends orchestrated a very awkward meeting but then Rich and I talked until we were kicked out at closing time. We covered every topic: music, movies, religion, marriage and our families. I felt like I had known him my entire life. We kissed at the end of the evening and my friend got quite cross at me for this but something had just clicked for me, and evidently for him too.

Fast forward to September of that year and we moved in together! Then in December of that same year we had our first Christmas in our new home. Although, Rich made it extra special by surprising me with a diamond solitaire ring and a proposal in front of the Christmas tree. It was magical. Of course I said yes! We were married in December 1993, 29 years this year, and I still feel like the luckiest woman on earth. 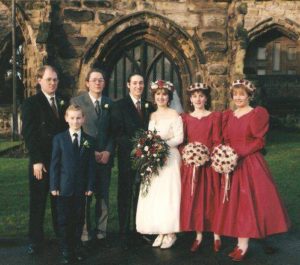