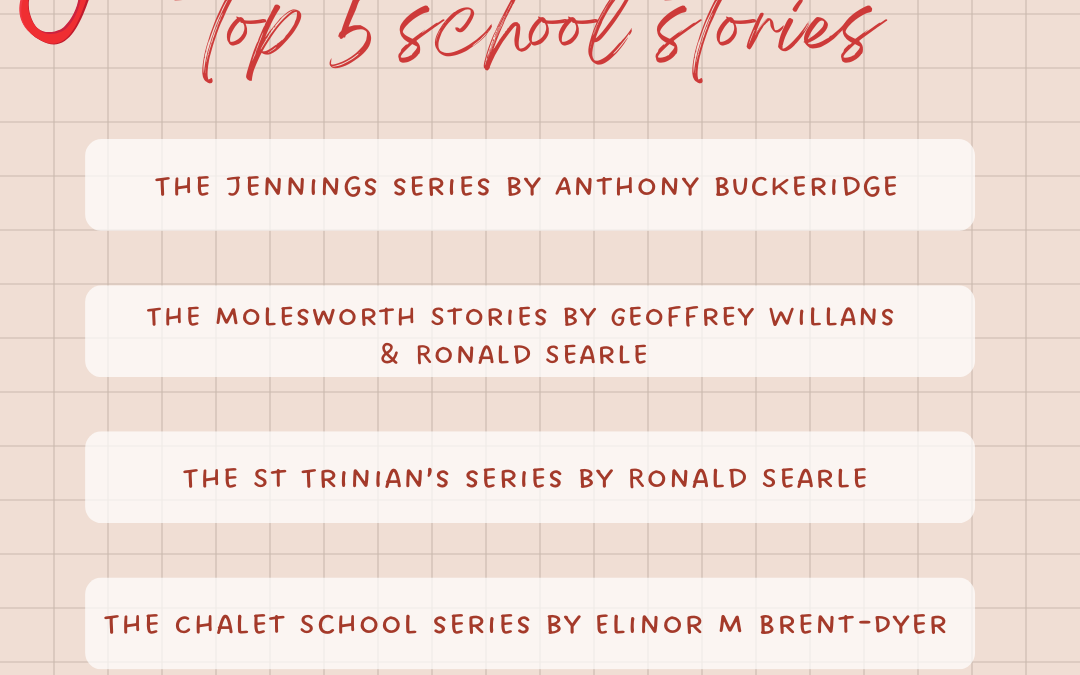 Although many readers describe the Gemma Lamb Cozy Mysteries as “Enid Blyton’s Malory Towers for grown-ups”, my favourite school stories are quite different from Blyton’s – although I venerate and enjoy hers too!

First of all is Anthony Buckeridge’s series set at a prep school featuring the well-meaning but bungling Jennings and his meek best-friend Darbyshire. Buckeridge took his inspiration from the prep schools where he taught in the 1940s and 50s. Jennings’ adventure are filled with farcical situations and archaic schoolboy slang that I relished reading at a child of the 60s, and still do.

Two other highly comic series about schools originated at the pen of cartoonist (and war artist) Ronald Searle. The hilarious antics of Moleworth, a rebellious young boy at a very minor prep school, of which Molesworth is a vocal critic, were a co-production with writer Geoffrey Willans. Again, it’s a mid-century series, in some respects very dated, but all the more quaint for that, and its comedy about adversarial teachers and pupils is timeless.

The St Trinian’s series is exclusively Searle’s cartoons, set this time in a girls’ boarding school. St Trinian’s also took on a new life and popularity with the making of two series of films inspired by the books, first in the 1950s, starring Alistair Sim as the headmistress (and in drag as her brother) and secondly in the 2000s, with Rupert Everett in those roles.

Both these series are delightful in different ways, although the schools are far seedier, the staff more debauched, and the pupils much naughtier than at St Bride’s.

My fourth choice is pretty much devoid of humour but is also a period classic – Elinor M Brent-Dyer’s very long Chalet School series, about a private boarding school set up in Austria not long after the First World War. It has gained a lasting cult following, despite now seeming very dated for its attitudes towards women, politics, class, and race, and for its complete disregard for “Health and Safety”! It’s a completely absorbing world, full of interesting characters from many different countries and backgrounds who must learn to live together in their curiously small and sheltered setting.

My fifth choice is grim, chock-full of brooding atmosphere. Joan Lindsay’s Australian classic “Picnic at Hanging Rock”, set at the turn of the twentieth century, tells the mysterious tale of the disappearance of a party of boarding school girls during an outing to the bush. Never solved, but with clues and hints running through the whole story, it has also been made into a film, and remains a compelling and haunting read.

I suspect elements of all these school stories, and more, influence the way I write about schools – but so does the English state grammar school for girls that I attended in London (then called Beaverwood School, not Chislehurst School for Girls), as well as my time working at Westonbirt School in the Cotswolds.

I guess the closed setting of a school, in its own building and grounds, will always be a great starting place for world building, and whether we loved or hated our own experience of education, schools remain fascinating places for readers of all ages.