Growing up, I didn’t have a sister. I was my parents second child and have a brother who is four years older, so unlike my characters Molly and Beth, I never had the experiences of how sisters behave, or how they interact.

Would I wish that things had been different – not a chance. 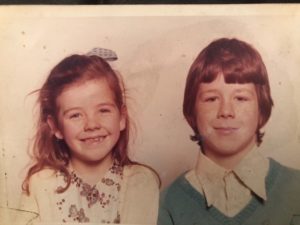 My brother and I did everything together and much to his embarrassment in the early years, I used to follow him, and his friends around and probably made his life quite a misery. As we grew, we learned that doing things together wasn’t all that bad. We were both in a brass band, we both did Tae Kwon Do, if no one else in our group of friends was going to the nightclub we used to go together, split up once inside and meet up again to go home… and now, he has a business and I’m his Sales Director. I still get to see him every single day and to be fair, I’d say that having a sibling isn’t that bad.!

When I chose Molly and Beth’s story, I needed to make them very different. They couldn’t have done all the things I did growing up; life is different now and I fully appreciated that a fifteen-year-old girl would act and do things very differently to how I would have done at the very same age. There’s now the added element of technology, to a teenager having Wi-Fi is the most important thing in the world and I had to show that without it taking over the story.

As for their ages – I wanted to make the age difference quite a big one. Molly needed to be old enough to have already carved out a career for herself, have a good income and a life that is completely altered when she becomes Beth’s impromptu parent after her mother’s brutal murder. It’s a position she resents, a position she struggles with, and I wanted to show the difficulties and thought processes she’d have as a young adult who was now the sole carer of a young and impressionable sister. One who had a mind of her own and an opinion she didn’t mind sharing. This all meant that the dynamics between the sisters needed to be right. They needed to have just enough quarrelling, just enough instances of tenderness and one or two dramatic moments, with the slamming of doors and sarcastic inuendo’s that are thrown from one to the other.

I also had to ensure that even though she was under a lot of pressure to keep Beth safe, Molly’s love for her sister is unwavering. She might be the one to chastise Beth, to keep putting her on the straight and narrow, but woe betide anyone else who might want to step into those shoes and God help anyone who might want to hurt her.

My story begins when Molly and Beth inherit a house that stands on the edge of a cliff, overlooking the bay of Filey. This house should be a new start for them both and to look at it, it should be the most idealistic place on earth to live and it is… until someone from their past turns up, watches them, knows their every move and in a very calculated way, plans their downfall.