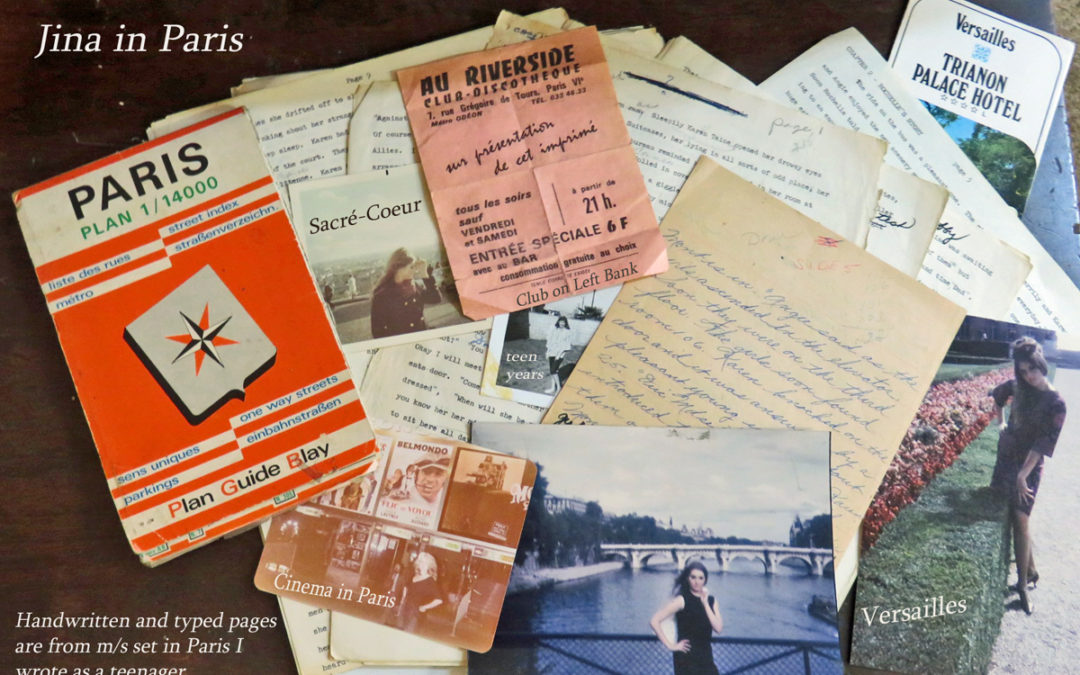 How my love affair with Paris became ‘The Resistance Girl’

I was a shy teenager the first time I walked down the Champs-Élysées on a bustling Saturday night, wide-eyed and pony-tailed, when a young man grabbed me, kissed me, and then disappeared into the crowd.

I touched my tingling lips. Wow… a Frenchman kissed me.

I sighed, basking in my ‘liberated’ moment, grateful my parents hadn’t seen what happened. I was beyond thrilled and, in my teenage brain, I was now a ‘woman of the world’. When we returned home, I was determined to write a novel about my experiences in Paris.

Excuse me? Did you say ‘experiences’?

Okay, I was still a kid, but that didn’t stop me. That year I went to a convent school and every day in study hall, I penned chapters about a spunky teenage detective and her best friend who go to Paris. There they solve a mystery about lost jewels hidden inside tall, chapel candles during the war to keep them out of Nazi hands.

I called it ‘Mystery in Wax’ – very Nancy Drew-ish.

When I went to a co-ed school, I abandoned my story for my new interest: dating, but I never gave up my dream about writing a novel about Paris. Every time I traveled to the City of Light, I wrote a new chapter on the notebook of my soul, inhaling the perfume of the past that lingered there. I was fortunate to travel at a time when Parisian apartments still had concierges (now replaced by digicodes) and you could see bullet holes in the buildings from the fighting during the liberation of Paris. I became enthralled with the placards embedded on the stone walls honoring the brave who had fallen ‘on this spot’ during the Occupation. When I ran my fingers over the cracked holes in the stone, I got chills, inspiring me to write about the men and women of the Resistance.

I also wandered around the Louvre before the glass and metal pyramid was built, bought old French movie posters at the flea market, and explored the palace and the grounds of Versailles when I spent a holiday at the historic hotel nearby where movie stars and statesmen stayed. When my heroine, cinema star Sylvie Martone, films on location at Versailles during the war, I drew on those memories to bring the chapter to life.

And I watched people. I practiced my French on anybody who’d listen.  I’ll never forget the woman I met outside Sacré Coeur, begging for francs. She had a dirty, linen bandage wrapped around her leg, a frayed, woolen scarf around her neck she kept tightening as if she were hiding something, and she walked with a limp. She’d fallen on hard times and survived by begging. We sat on the steps outside the basilica and talked for a long time. I pressed whatever franc notes I had on me into her palm. Her hand was cold, but the light in her eyes was warm and thankful.

That afternoon became a pivotal scene in The Resistance Girl. In 1935, Sylvie is at her lowest moment since she became a film star, desperate and in despair, not realizing how dear the price of stardom can be. I won’t spoil it for you but if you read my story, you’ll smile when you get to that part, knowing where it came from.

Then there was my encounter with a flamboyant millionaire from Bombay and his college-age daughter. We met after I got tossed out of a fancy restaurant because I didn’t have a male escort. He invited me to dine with them at the Hôtel Ritz and afterward the three of us saw the sights. He had connections in the film business and I swear we went to every theater in Paris, allowing me to get a look behind the scenes. That experience became fodder for the theater scenes in my story; e.g., when Sylvie is discovered in a movie theater at sixteen by the famous director, Emil-Hugo de Ville; and later when Sylvie is taken blindfolded to the old theater to meet members of the Resistance, as well as the scene in a grand movie theater when Sylvie is seated next to a Nazi general at the premiere of her new film.

There were scary times in Paris, too. Like the sheer terror that engulfed me when three sleazy men accosted me on a narrow cobblestone street on the Left Bank. I was hanging out with friends at a club and afterward as we walked down a dimly lit passageway toward the Seine, I wandered off to window shop when the thugs surrounded me. I freaked when they picked me up off my feet to cart me off to God knows where… most likely, sex trafficking. The fear I felt that night became the core of Sylvie’s meetups with the notorious Herr Avicus Geller of the Gestapo. The feeling of not knowing if you’re going to survive. I’ll never forget the spicy scent of hashish that made me gag, mixing with the pungent smell of wine on the breath of the ringleader when he warned me to keep quiet or—

He didn’t know who he was dealing with.

I wasn’t that young teen anymore. I was stationed in Italy with the US military and I’d learned to play a mean game of pool with the soldiers at my service club. I elbowed the thug on my left with a martial arts move I learned from a guy in the Air Force, then I yelled out in English for help, then in French, loud. To my relief, the kidnappers saw my friends coming to my aid and dropped me on the cold cobblestones before running off.

So, yes, I’m a firm believer that writing a novel isn’t just about sitting down at your computer with your Internet and book research, your notes, and years of writing tradecraft under your belt.

Whether it’s something that happened to you yesterday or decades ago, it’s all there written on your soul, waiting for you to give it life. The details get fuzzy, but with a little prodding (and coffee or tea), the emotions, feelings, and motivations rise to the surface and your subconscious works them into your story.

I call it the ‘heart’ of the book because it’s that living, breathing drumbeat of the human experience – your experience – that gives your story the emotional impact and realism only you can write that keeps the reader turning the pages.

And the beat goes on…

PS – my story is dedicated to the brave men and women of the Resistance… may we never forget.