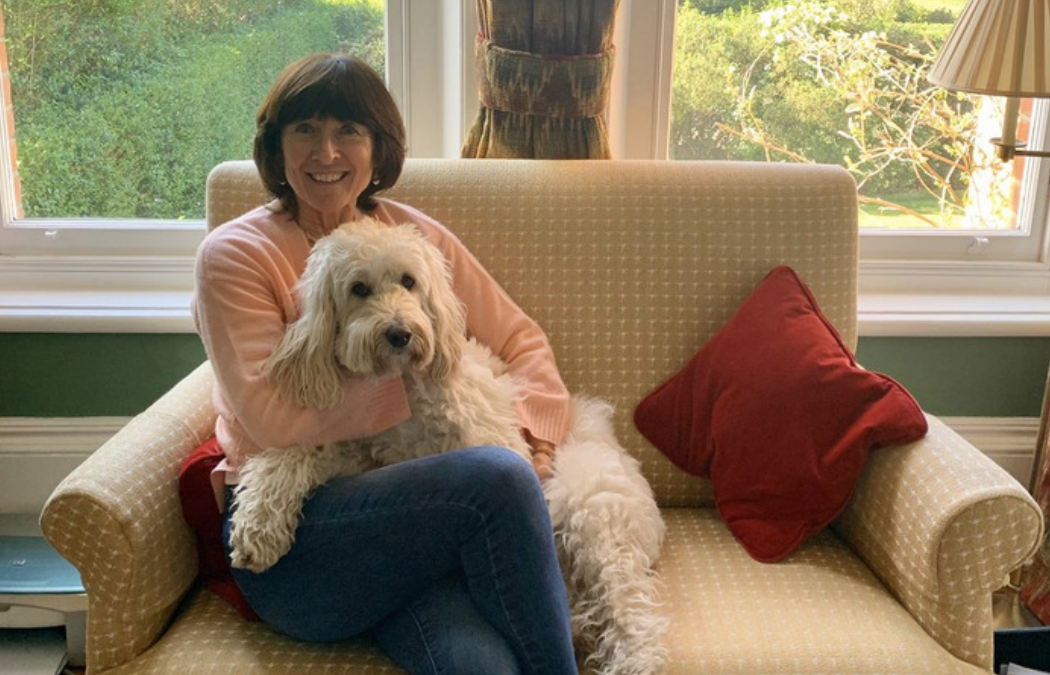 It all began so well.  I’d been invited to spend two days over Christmas with my brother and his young family in their gorgeous Sussex home.  I zoomed out of London on a blue, crisp Christmas Eve, the boot of the car crammed with gifts and the radio blaring the Nine Lessons and Carols from the angelic Kings College Choir.  On the back seat, my blonde bombshell of a golden doodle, Mabel, now 18 months old, kept her big nose pressed to the window like an excited child.  She had been a bonkers pup, but in recent months had really started to settle down and I couldn’t wait to show her off.

‘She’ll be all right shut in the kitchen overnight, won’t she?’ my brother said, once was Christmas Eve dinner was done.  I knew this was an instruction and said a confident yes, since I never let Mabel upstairs at home.  As things turned out however, Mabel wasn’t ‘all right’ in the kitchen.  She yelped and howled the moment I left her, obviously not liking the strangeness and having no clue where I’d gone.  After a few failed efforts at reassurance and resettling, acutely aware of how the dreadful doggy wailing must be keeping the entire household awake, I gave in and moved her bed into the hall.  I figured this meant she could see me disappearing upstairs – just like at home – leaving her secure in the knowledge that it was a place from which I always returned.  I closed all the other ground floor doors, gave her a last pat and kept my fingers crossed.  A bit of whimpering followed, and then a blissful silence.

Coming down early the next morning, Mabel greeted me with a wildness which I read as sheer exuberance at our reunion.  Even when she threw up – some brown sludge – a minute into our morning walk, I wasn’t unduly worried. Dogs sometimes find disgusting things to eat and Mabel had a sensitive stomach due to an early incident in her puppyhood.  She was getting whatever this was out of her system, but remained full of beans.  By the time we got back to the house I still thought all would be well…

Dear Reader, all was not well.  The puking continued – inside, outside – wherever I put her.  I rushed round with hoses, mops and buckets, apologising to my brother and his wife, while that old phrase “sick as a dog” began to take on new, vivid meaning.  Somehow, I still thought it would pass.  My main concern was how we were ruining Christmas, what with the sodden carpets and Mabel being super-annoying – barking, panting and jumping on everyone like a mad thing.

Early on in the mayhem, I had taken the precaution of checking that the pile of presents under the tree – safely behind a door I’d closed myself the night before – hadn’t been disturbed, and all had seemed fine.  It was only much later (during yet more puke-mopping) that I spotted the telling remnant of a chewed Christmas gift tag in a corner and twigged that opening doors (if they have a loose-ish catch) could be part of a golden doodle’s skill-set.  The gift to which the tag had once been attached, a bar of Green & Blacks chocolate, had completely vanished.  Mortified, it at least solved the mystery.  I apologised profusely.  I even laughed a little.  Cocoa could make chocolate lethal for dogs, I knew, but surely not just one bar….  Except it transpired it wasn’t just one bar that had vanished, but SEVEN bars.  All Green & Blacks.  All off-the-scale in cocoa content.  Mabel had, in effect, taken a massive, toxic overdose; her system was in over-drive, and getting worse.

My dream of a special doggy/family Christmas dissolved into a blur of emergency vet visits and drugs that didn’t appear to work.  Back in London that evening, I sat alone, wondering how I would cope losing a creature who had so recently and so completely stolen my heart.  It took two days (and one thousand pounds of bills) to be sure she would pull through.  Not the festive gift I had been expecting, but none have made me happier.

Click on the banner below to see more of Amanda’s books – available in ebook, audiobook and paperback.