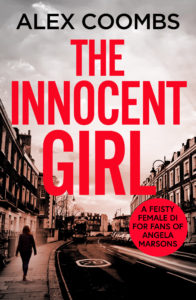 Read on for an exclusive extract from ‘The Innocent Girl’ by Alex Coombs.

In her student bedsit, Hannah opened her eyes and allowed the fantasy to gently drift away as recommended by Catching Your Dreams (And Making Them Come True), the self-help guide she was studying.

In the private theatre of her mind, with herself as appreciative audience, Hannah had just graciously received a BAFTA for journalism. She held the award aloft and waved to her adoring public. Soon she’d have her own TV series. She’d get to meet celebrities, no, she’d be a celebrity. She’d, well, the possibilities were practically endless. She now allowed the dream to disperse. Reality took hold.

She sighed, stretched and shifted her weight on her narrow, cramped bed in the small, dilapidated room off Gower Street in Bloomsbury, central London, that was her temporary home. The walls were marked by small circles where a succession of students had Blu-tacked posters of their idols. Their ghostly residue defied repainting.

Traffic rumbled by outside. She looked at her Facebook page open on her laptop. On her wall she had written, Am seeing sexy married man tonight 😉 and added, after a moment’s thought, But that’s not all ;D have decided to explore my inner chick feelings with some girl on girl (well, this girl on one married lady, why do these people bother to get hitched!) action! Will let you know how it’s going later 😉 Don’t forget to check my blog! :D.

That’ll get tongues wagging, she thought. More to the point, that’ll get people reading. Sex sells, or so they say. No point writing without an audience. That’d be the sound of one hand clapping.

She was pleased with the Zen allusion. It was classy.

She repeated to herself, ‘I am classy, I am a success,’ three times, aloud. It was important to raise your self-esteem, the book said.

She closed her eyes for a minute and settled down to allow herself another brief, momentary fantasy of fame.

Her phone beeped and she checked it. One of her two lovers was on their way round. Hannah felt a surge of sexual anticipation coupled with professional, journalistic excitement. She had spent hours tracking people down to check a theory she had about the relationship of one of her lovers with Dr Fuller; tonight she would have it confirmed.

Hannah was no fool. She knew wishful thinking alone, no matter how directed, would not get her a job on The Huffington Post or the Sunday Times or the BBC. Exposing a famous (well, semi-well-known) academic as a serious philanderer, abusing his position of trust as well as potentially killing one of his lovers, and writing about her investigative work online, now that just might. At least it was a start. And Hannah was prepared to do whatever it took to realize her ambitions. Whatever it took.

She typed her revelation about her lover into her blog. It had a disappointingly low number of readers at the moment, but that would soon change. Very few people had heard of her, but lots of people knew Dr Fuller. Soon they’d all have to log in to get the lurid details. Later she’d think of a suitable headline.

She heard the entry-phone buzzer. Her partner had arrived. She pressed the button to open the door downstairs, opened her own door a crack and then lay face down submissively on her bed, as she’d been instructed to do.

Hannah slipped the black velvet hood over her head. Her lover liked her blindfolded, passive and quiescent.

She heard footsteps in her room and the door closed. All her senses were heightened now in the velvet darkness of the hood. Sound was magnified. Sensations were amplified. The click of the door as it shut had an ominous finality.

She could hear his breathing, the traffic noise in the street outside, someone’s TV down the hall. She heard the faint noise of an iPod being attached to her docking station and old-fashioned dance music filled the room. Hannah’s pulse quickened when she felt the mattress on the bed move as her lover sat beside her and started stroking her head through the material of the hood.

She felt her skirt being pulled up and then she heard her lover say softly, ‘I thought I told you. White underwear, not black.’ There was a pause and then he murmured, ‘Now I’ll have to punish you.’

‘I’m sorry, Teacher!’ she said. Her lover insisted on her using the title. Not to do so was to be punished. At the start of their relationship he’d made her write a contract out, detailing her slave duties. Everything they did together was rigorously, relentlessly planned and choreographed. There was a script written by him that she had to follow. Nothing was left to chance. Everything was controlled, even down to the music playing in the background.

Especially down to the music in the background. He was insistent upon it. Always dance music. She guessed that it meant more to him than simply a soundtrack or just something to drown out the noise of their lovemaking. The intensity of his expression was sometimes frightening.

‘I’ll do anything you say,’ she said, her voice muffled by the material of the hood.

‘Yes, you will, won’t you,’ said the voice, calm and in control.

Always in control. ‘Arms behind your back.’

She did as she was told. Now her wrists were secured behind her back with handcuffs, depriving her of the use of her arms. She felt her underwear being pulled down and then a searing pain across her buttocks as the riding crop swished down. She bit her lip in pleasure at the stinging sensation. Her laptop pinged as someone emailed her; she felt a twinge of irritation that she’d forgotten to log off. Bloody thing.

She felt the weight of the other leaning across her body momentarily. Was he reading the blog? Surely it had moved to screen save?

She felt the familiar, strong fingers close around her throat. She arced her neck upwards submissively to allow him a better grip, the index finger against her jawbone. She felt the pressure closing, tightening, then her airways constricting as she heard the voice whispering, ‘Who’s been a naughty girl then?’

The artist changed on the iPod and the music shifted up a gear. A voice from way back when, a voice from long before she was born, Donna Summer’s voice, ethereal and urgent, sang how she felt love, over and over again, floating above the robotic, synthesized drums.

The fingers closed around her again, but it was not like   it had been before, not gentle, not fun at all, and she bucked beneath the other body, now pressing down on top of hers so she couldn’t move, in genuine alarm but to no avail.

They had a code word to use to stop any activity, but she couldn’t speak.

Now her alarm changed to fear, and as the pressure continued, naked terror.

Please God, she prayed, make this stop! She could hear the song in her ears about how it felt good, so good, so good, but it didn’t feel good. Not good at all.

She was choking. She couldn’t breathe. It was like a night- mare and fear changed to terror. Now she could hear the blood hammering in her ears, as insistent as the music, and wild patches of iridescent colour seemed to explode in the darkness behind the hood. The music swelled to a crescendo and still the iron grip tightened.

Above her, straddling her body that was trying so hard and so ineffectually to buck him off, he hummed along to the music, his head nodding in time with the beat while his grip never slackened.

Gradually he felt her movements slowing and ceasing, and her body relaxed as her life departed.

Her killer rolled off her body and stood momentarily looking down at Hannah with genuine regret, then leaned forward and with gloved fingers delicately deleted the last section of the blog.

We hope you enjoyed this extract. To read more, purchase the full novel here: https://amzn.to/3bGjMNv