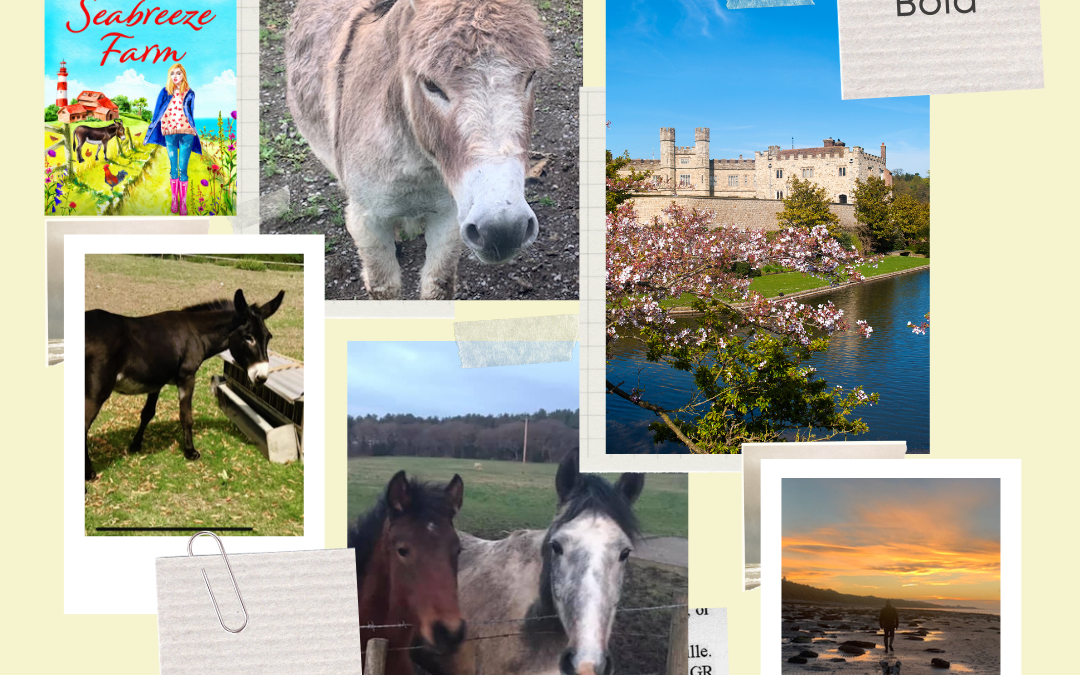 Share this:
Discover beautiful Kent through Jo Bartlett‘s wonderful Seabreeze Farm series on our #GreatBookishRoadTrip! 🌎
Read Jo’s blog on her love of Kent ⬇️
There’s good a chance I might be biased, having been born in the county and spent most of my life here, but if you haven’t already visited Kent, then you really should put it on your must-visit list. From the iconic white cliffs of Dover, to the beautiful High Weald, via the medieval majesty of the stained glass windows in Canterbury Cathedral, it’s truly a county that offers something for everyone. There’s a coastline stretching 350 miles, open countryside, dense woodland and the county is home to just one city, Canterbury, protected by its Roman walls and small enough to feature in the list of the tiniest cities in England.
Kent has a unique history, not only is it the gateway to Europe, it’s also the gate keeper, and for centuries its coastline has been the first line of defence against less than welcome visitors. With more than thirty castles it would be hard to single out those which most deserve a visit, but there are two absolute must-sees. Dover Castle offers a fascinating insight into a two-thousand-year history – incorporating Henry II’s grand Great Tower, and the Port War Signaling station, hidden in a labyrinth of tunnels beneath the cliffs upon which the castle perches, which played such a vital role in World War II. Then there’s the stunning Leeds Castle, near the county town of Maidstone, which is listed in the Doomsday Book and has been referred to as ‘the loveliest castle in the world’ for very good reason. A Norman stronghold, the beauty of this medieval keep and stone castle is enhanced by its setting on two islands in the centre of a magnificent lake.
Another thing that distinguishes Kent from other counties is its fruitfulness. Legend has it that it was Henry VIII who christened the county the ‘Garden of England’ after enjoying a plate of delicious Kentish cherries. It’s not just cherries, apples and strawberries that grow so well in one of the warmest corners of the UK, Kent is also famous for it hops. Any trip around the county will ensure you encounter not just acres of orchards, but also vineyards to rival France’s Champagne region and beautiful oast houses, which are quintessentially Kentish and were traditionally used to dry out the hops which grow so well here. If sampling a local tipple takes your fancy, then Faversham can offer both tours of the Shepherd Neame brewery, for a pint of ‘Sheps’, and the annual hop festival each September. The county showground in Detling plays host to the cider and sausage festival every July, and there are numerous vineyard and wine tasting tours across the county, including at Chapel Down, a world-class producer of sparkling wine, gin and vodka.
If the miles of coastline, acres of countryside, forests, history, and locally produced food and drink on offer doesn’t tempt your fancy, how about a bit of culture? Kent certainly has its fair share of literary heroes, and you can retrace the footsteps of the characters from Geoffrey Chaucer’s Canterbury Tales along the Pilgrim’s Way. Broadstairs is the site of Charles Dickens’ infamous Bleak House and home to the Dickens’ festival in June, where all things Dickensian are celebrated and Victorian dress is the order of the day, you can also find the Dickens’ museum in this picturesque seaside town. Rochester in mid-Kent, has close association with Dickens too, and Eastgate House features as both Westgate in The Pickwick Papers and the Nun’s House in The Mystery of Edwin Drood. Rochester also hosts the annual Dickensian Christmas festival in early December. If Art is more your thing, the Turner Contemporary in Margate, offers you the opportunity wander around the latest exhibition and observe the skies and light that inspired JMW Turner, the gallery’s namesake, during his visits to the town.
If all of that isn’t enough to convince you to visit Kent, don’t forget that it’s sandwiched between London and the ports and railway stations that are still the gateway to Europe. So, wherever you are in the county, you can get to the capital, or hop on a train or boat to Europe within as little as sixty minutes.
My novel #WelcometoSeabreezeFarm celebrates so much that is wonderful about Kent, and I hope the series will make people fall in love with my home county as much as they do with characters they’ll meet along the way.