Why Were So Many Women Accused of Being Witches? 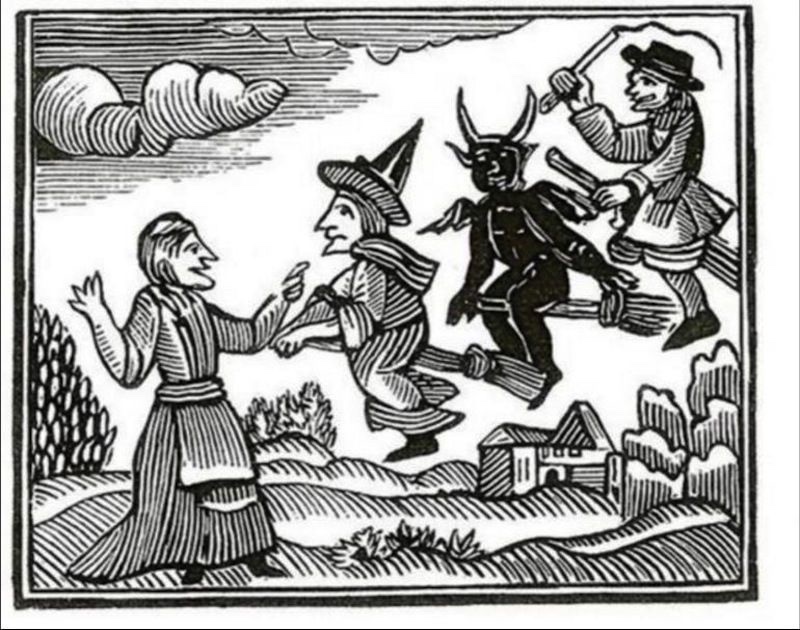 Share this:
A blog post by Elena Collins/Judy Leigh on #TheWitchsTree!
During my research for The Witch’s Tree, I came across an interesting reason why so many women were harassed and accused of witchcraft. The simple answer is the power of the media. Here’s an article I wrote about it.
There is a common stereotype of women as witches, that they fly on broomsticks; they are often very old, unattractive, with sprouting warts and large noses; sometimes, they are irresistibly beautiful and use their charms to gain power. They make spells, collect in covens around a cauldron at night, cackle and consort with the devil and invariably seek to harm weaker and more vulnerable members of the community. You’ll recall the delightful spell speech from Macbeth:
Eye of newt, and toe of frog,
Wool of bat, and tongue of dog,
Adder’s fork, and blind-worm’s sting,
Lizard’s leg, and owlet’s wing, —
For a charm of powerful trouble,
Like a hell-broth boil and bubble.
Double, double toil and trouble;
Fire burn, and caldron bubble.
But where did this popular stereotype come from? And was it simply an innocent gothic idea of the imagination, or does it have a more sinister origin? The answer might lie in age-old prejudice, and in the mass media of the fifteenth century.
Johannes Gutenberg’s invention of the printing press in 1450 was perhaps the beginning of widespread dissemination of opinion. The press was capable of quickly reproducing text: by the end of the fifteenth century, there were presses in sixty of Europe’s largest cities.
The Catholic church was loud in its challenge of witchcraft and sorcery, and accusations against ordinary women were becoming more commonplace. But the publication of Malleus Maleficarum by Heinrich Kramer and Jacob Sprenger, published in 1487, would become the most widely read document in Europe. The impact was incredibly powerful; it created a popular image of witchcraft in European society that hadn’t previously existed, which persisted for centuries to come. The power of print and the affect upon those who read it was widespread, and the superstition and persecution began.
Malleus Maleficarum means The Hammer of Witches, and it is a treatise on witchcraft. The authors were Dominican Inquisitors who recommended torture to obtain confessions and wrote that the death penalty as the only certain remedy against the evils of witchcraft.
“And so in this twilight and evening of the world, when sin is flourishing on every side and in every place, when charity is growing cold, the evil of witches and their iniquities superabound.”
Because The Malleus reached a wide audience through the printing press, persecution of witches developed fast during the 15th century, becoming a frenzy that lasted for over two hundred years.
By 1650, somewhere between 200,000 and 500,000 women (and a few men) had been accused of witchcraft across Europe and were condemned and killed. Although The Malleus had no images, it was responsible for promoting the subject of witches as a favourite with artists, and woodcuts in the 16th and 17th century allowed a cheap dissemination of images to the masses, many of whom could not read well if at all, but were seized by the visual impact and simple, inflammatory text.
In 1579, another pamphlet was circulated, gaining notoriety in popular culture. It was called A Rehearsall both Straung and True, of Hainous and Horrible Actes Committed by Elizabeth Stile, alias Rockingham, Mother Dutten, Mother Deuell, Mother Margaret, Fower Notorious Witches.
The pamphlet described in striking detail the terrible activities of Elizabeth Stile, a sixty-five-year-old widow and three other women whose names had been extracted from her during confession. The women were accused of a variety of foul deeds: inflicting illness, committing murder, feeding their own blood to animal familiars. The text was accompanied by lurid illustrations. These pamphlets were greeted with frenzy and superstition, intensifying the persecution of women and creating the popular stereotypical image of witchcraft that has persisted for centuries.
The circulation of incendiary material from the printing press and its reception by the masses exposes the power of print and how it can deeply and irrevocably shape human prejudice and opinion. Perhaps that is why the word witch today is still seen as an insult or an accusation.
Shakespeare’s famous play reiterates the stereotype in 1606 in, popular with the masses, when Macbeth calls upon the witches:
‘What are these
So withered and so wild in their attire,
That look not like th’ inhabitants o’ th’ Earth,
And yet are on ’t? —Live you? Or are you aught
That man may question? You seem to understand me,
By each at once her choppy finger laying
Upon her skinny lips. You should be women,
And yet your beards forbid me to interpret
That you are so.’
Start reading for 99p or FREE with Amazon Prime Reading!