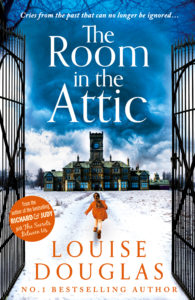 One of the characters in The Room in the Attic is a young woman called Thalia Nunes, who is committed to All Hallows private mental asylum in 1903 by her wealthy father because he does not approve of her behaviour.

He asks that she be made to suffer whilst in the asylum, in a bid to make her see what he regards as the error of her ways. Better this, in his opinion, than the humiliation of having a daughter he cannot control.

Thalia’s situation was not unusual. For the greater part of the last two centuries, being declared insane and incarcerated in an asylum was a real and pressing fear for women. Fathers, husbands and brothers had the legal right to commit those wives, daughters and sisters who displayed, in their opinion, behaviour that was unnatural for their gender.

Who decided what was ‘natural’ behaviour for women? Men of course – although to be fair, many women agreed. Women were considered to be mentally and physically frail and were brought up to believe and propagate this assumption themselves.

In her brilliant book Women and Madness, Phyllis Chesler observes that it was the other women, those who did not conform to male-imposed stereotypes – the rebels, those who were bored rigid by housework, those who did not want to become mothers and those who took lovers, who were regarded as being ‘sick’, even though the qualities they displayed such as ambition, courage, intellect and promiscuity would have been seen as healthy in a man. There were double standards in mental health just as there were in morality.

According to author and historian Carroll Smith-Rosenberg, ‘there were general feelings of what caused abnormal behaviour, and usually this was a refusal of traditional gender roles.’

For example, in Britain in the early 1900s, it was deemed ‘unnatural’ for women to wish to pursue independent careers because these were pretty much incompatible with the ‘natural’ desire to be married and have a family.

As well as societal pressures, the underlying conviction that women were the weaker sex, mentally as well as physically, also played its part. The word ‘hysteria’ comes from the Greek word ‘hustera’ which means womb. In the 19th Century, hysteria, was sometimes called ‘the daughters’ disease’, and was often diagnosed amongst young women who were prone to ‘irrational behaviour and attention seeking displays.’

‘Hysterical’ is an adjective that’s rarely applied to men, even very angry men, even today.  No matter how justifiably angry a woman is, her behaviour is still more likely to be blamed on hormones, mood swings and irrational emotions. Women are said to be affected by the cycles of the moon, which makes us the original ‘lunatics’.

It’s less than a hundred years (1928) since the vote was awarded to women in England, Wales and Scotland on the same terms as men. And the Suffragettes who fought for this privilege, were widely condemned at the time for their unwomanly behaviour.

Lord Curzon, President of the National League for Opposing Women’s Suffrage listed amongst his ‘incontrovertible’ arguments against women being trusted with the vote, their lack of ‘calmness of temperament’ and ‘balance of mind’ especially in ‘emergencies or on occasions of emotional excitement.’

Of course, those many thousands of women who suppressed their ambitions and desires, who swallowed their anger and internalised the criticism meted out when they didn’t conform to the feminine ideal, were more likely to become genuinely depressed or anxious and, consequently rejected by society. It was a vicious circle.

Sylvia Plath, who spent time in an asylum after a failed suicide attempt and botched electric shock therapy, wrote a brilliant, angry poem about ‘the courage of the shut mouth’, describing the necessity of presenting a calm exterior while rage built inside her. Plath’s relationship with Reverend Ruth Barnhouse, who she met in the asylum, formed a lifeline for the poet and is documented in Plath’s novel The Bell Jar.

I hope the fictional Thalia’s story in its small way pays homage to the stories of the real women who inspired the character, particularly those ‘deviants’ who formed the suffragette movement and fought for women’s rights.

It’s easy to forget but important to keep the past in mind. It’s never very far behind us.

The Room in the Attic is out now!